For Lunning, positivity paid off 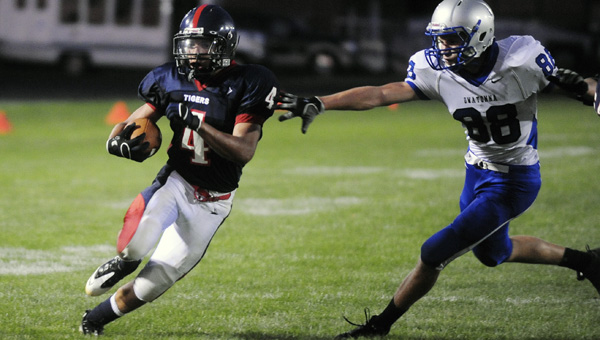 The 2011 football season didn’t start the way Makael Lunning expected it to.

In his first season as Albert Lea’s starting running back, the junior anticipated solid offensive execution, despite running a new coach and new offense. But through the team’s first four games, the Tigers were outscored 181-28 and didn’t muster more than a touchdown each week.

So much for execution.

“It was frustrating but we knew we had to be patient,” said Lunning. “We knew the second half of the season wasn’t going to be as difficult as the first four games. We had favorable matchups and kept working on what we needed to do for the next week.”

Then Lunning and the Tigers finally broke through.

During the last weekend in September, the Tigers went on the road and crushed Winona 33-13 for its first win of the season. Lunning ran for 132 yards in the decisive victory, which also snapped the team’s three-game losing streak to the Winhawks.

The junior scored two touchdowns, including one on a 78-yard scamper, forced a fumble and recorded an interception.

Lunning said the win came after the season’s most intense week of practice as the Tigers knew they had an opportunity in front of them.

“We knew Winona wasn’t as good as they had been in years past, and we figured this is our game and we took care of it,” Lunning said. “We were sick of losing at that point and worked that much harder to get a win.”

The once listless Tigers turned around and scored 94 points during the second half of the season, beat their arch rival, Austin, and gave Northfield a scare in the Section 1AAA Tournament.

Lunning entered this season as a relatively inexperienced back after playing behind Ethan Abben, Dillon Stolt and Cory Hansen last year. Lunning broke through with a 105 yards against Rochester Century during Week 5 last season and got his chance to start this year with Abben moving to quarterback.

The junior produced 535 yards on 124 carries and scored a team-high seven rushing touchdowns. Lunning added a touchdown through the air as he caught 14 passes for 135 yards.

But Lunning didn’t star only on offense. He finished third on the team with 41 tackles and grabbed an interception. He was also the Tigers’ leading kickoff returner and averaged 23.3 yards per return.

Lunning was forced to play in all three phases because of his talent and the team’s lack of depth.

The junior said he didn’t mind.

“Obviously you want more depth but I like contributing that much,” Lunning said. “During the first few games it was kind of a lot, but once I got used to it and was in shape more I focused on what was going on in the games rather than being tired.”

With a new head coach this season in Max Jeffrey, Lunning faced the task of learning a new offense and saw his role change on the field.

“It was completely different,” Lunning said, of the West Coast-style offense. “I had to step in and do a lot more pass blocking and we threw a lot more. We didn’t really have set holes to run through but had to read the defense. I caught the ball more out of the backfield.”

Lunning said once the offense started clicking and an inexperience offensive line got repetitions, the team improved and so did he.

“Because of the reps and experience with every game I think the whole team improved throughout the season,” Lunning said.

Lunning said his favorite moment this season was beating Austin for a seventh consecutive time. He had 17 carries for 77 yards and three touchdowns in the 38-19 win.

“We knew that we’d beaten them up the past six years and didn’t want to break that streak,” Lunning said. “Just the fact that it’s Austin made it that much more important.

“We were faster than them and much more physical and it showed on the scoreboard. Afterward, I think everyone was happy and had a fun time, especially keeping that streak alive.”

Lunning, who said he enjoyed playing offense more than defense this season, was voted Team MVP by his teammates. He was also one of three Tigers to be named Big Nine All-Conference.