Fraud and identity theft are a concern during holiday season

As the holiday season is here, it is important for consumers to pay attention to their belongings and the information they are allowing others to access, especially on their social media pages.

Fraud and identity theft are a concern year-round, but this is the time of year where people tend to be in a rush to make purchases or to leave the house. 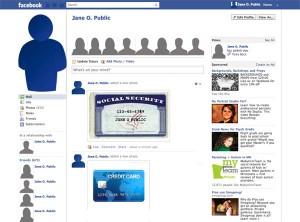 Albert Lea Police Department detective Ben Mortensen said on average he hears from one to two people a week about a problem with forgery, fraud or identity theft. Sometimes, it is a person from within the community. Other times it is an outsider calling to say their checks, debit cards or credit cards are being used in the area.

“In 47 percent of the cases, you know who stole your identity,” Mortensen said. “They’re someone in your circle of friends, family or that you met some place.”

Other times, like in Albert Lea resident Dixie Michaelis’ case, they are complete strangers pretending to know who their victim is.

About three months ago, Michaelis received an urgent phone call from a man and woman.

“The man told me, ‘This is an emergency. Your daughter is in the hospital. We don’t know what is going to happen. I think I should tell you that she might die,’” Michaelis said.

Michaelis hung up. The caller persisted. They immediately called her back two more times saying they’d need money before admitting her to the hospital. She knew something wasn’t right.

“I didn’t want to talk to them, and I knew I didn’t have a daughter, so I knew it was a scam,” Michaelis said.

The biggest concern Mortensen has is related to medical identity theft. He said it isn’t happening often around the Albert Lea area, but it has happened.

He said the thief gets a social security card or number, a driver’s license or a date of birth and full name of a person and goes in for medical treatment under their false identity. The victim is left to face the consequence of it being on their record.

Mortensen believes social media and the Internet have become ways thieves are getting everything they need to know, because people are putting information on websites that they shouldn’t be.

“Facebook knows exactly what websites you go to. They target you with their ads on the side of your page. It’s just like the con men. I’m not saying that Facebook is a con; I’m just saying it’s what the con men do. They watch stuff like that. They have computer programs that crawl Facebook looking for information. And it’s not only Facebook, that just happens to be the biggest one,” Mortensen said.

He pointed out when Twitter or Facebook members use their status or the check-in applications to say where they’re going or what they’re doing. They are just advertising to thieves that their homes are empty so come on by.

“Social media is not a bad thing. It’s just like everything else. You have to use it responsibly,” said Mortensen.

Besides the social scene on the Internet, scammers send out messages through email pretending they are a bank or someone else needing important information from the recipient.

“We can’t prevent emails from going through. All we can do is educate the people to erase it,” said Mortensen. “Don’t even open it up because what it does is that goes back and tells the person back there that it’s a valid email address and then they let all their buddies know about it so you get even more spam.”

Mortensen has seen identity theft happen to people of all ages. He said the older people are sought after because some are forgetful or even lonely and will welcome the opportunity to talk to someone.

But younger generations shouldn’t be naive and treat fraud or theft as something that will never happen to them.

“Of people who end up being the victims of identity theft, most of them are under 35 and the lowest numbers are over 65,” said Mortensen.

Protecting yourself from identity theft

• Hang up on unsolicited phone callers
• Shred unsolicited mail
• Lock your wireless router with a password
• Erase unsolicited email without opening it first
• Never send private information in reply to an email, call or stop by to speak with the person you know who is supposedly asking for the information
• Be careful of what Internet sites you are searching
• Don’t give out information to people you don’t know
• Keep your purse closed while shopping
• Keep your wallet in an inside pocket of your clothing
• Lock and remove valuables from vehicles
• Slow down and pay attention to belongings and surroundings when shopping
• If going away from home, ask a friend to keep an eye on things