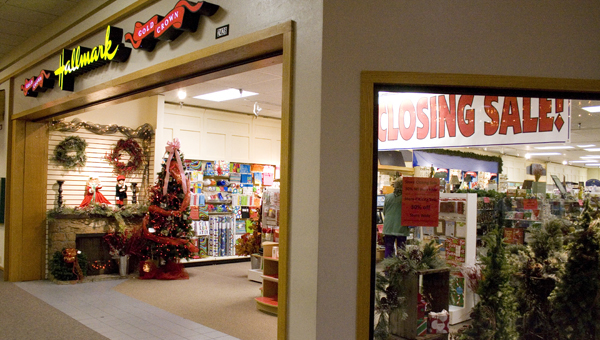 A large store closing sale sign can be seen from the outside of Doyle’s Hallmark in the Northbridge Mall on Friday. The store is anticipated to close sometime in January. -- Sarah Stultz/Albert Lea Tribune

Store officials of two stores in the south wing of Albert Lea’s Northbridge Mall announced in November they will close their doors. 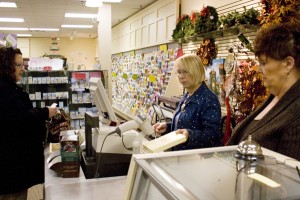 Doyle’s Hallmark employees Jo Bernard, center, and Barb Lampman, right, help a customer at the store Friday in the Northbridge Mall. There were several people checking out sales in light of the store closing.

Doyle could not be reached for comment, but employees Barb Lampman and Jo Bernard said they thought the decision was a result of multiple reasons.

Grocery stores and other businesses are selling Hallmark cards, and places such as Kohl’s have started selling Hallmark goods, they said. And people are not buying collectibles like they used to.

It ultimately boiled down to not having enough business, they said.

The Hallmark store had been in two locations in the mall since it moved from its previous location in downtown Albert Lea. Before that it had been in the Skyline Plaza.

“We’ll miss our customers,” said Bernard, who has worked for the business for six years. “You get to know them and their families.”

Fate said she is working on contacting a large Hallmark team to bring the store back through another means. 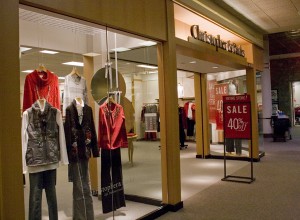 Christopher & Banks Corp. announced this week it was closing its Albert Lea store in the Northbridge Mall. Company officials said the store will close in January.

In the meantime, numerous large store closing signs have been placed to notify customers of the change. Some price reductions are also under way.

The second company, Christopher & Banks Corp., announced this week it would close its Albert Lea store by the end of January 2012. It is one of 100 stores being closed across the country.

The Albert Lea store is the only store in the state, however, that will close outright. In Roseville, two stores will be combined.

The closings come as the Minneapolis-based company seeks to restructure the occupancy costs of its remaining stores and to consolidate a number of its existing Christopher & Banks and CJ Banks stores into dual format stores — offering misses, petite and plus sizes under one roof.

“We anticipate that these initiatives will help us both improve overall store productivity and support our return to profitability,” said company President and CEO Larry Barenbaum.

According to a news release from the company, almost all of the stores that are closing are underperforming.

“These decisions are never easy but are critical to our financial health,” said Monica Dahl, senior vice president. “We remain committed to our customers across Minnesota, which will continue to be served by 45 Christopher & Banks, CJ Banks and dual-format stores.”

The release stated the Albert Lea location will close Jan. 24, 2012, allowing customers the opportunity to still shop during the holiday season.

Fate said she had not yet received word about the Christopher & Banks store closing; however, she encouraged people to shop local — more now maybe than ever.

According to the company website, Christopher & Banks Corp. has grown to more than 700 women’s specialty stores in 46 states after its first store opened 55 years ago.