Memorial services for Hazel Elaine Petersen, of Albert Lea, will be held at 2 p.m. Wednesday at the First Baptist Church in Albert Lea. The Rev. Clayton Balsley will officiate. Visitation will be 4 to 7 p.m. Tuesday evening at the Bonnerup Funeral Service, and one hour prior to the service at the church. Interment will be in the Rose Hill Cemetery, Wells. 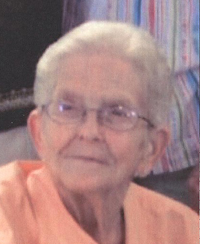 Hazel was born March 28, 1927, in Albert Lea, the daughter of Harry and Maude (Donahoo) Whitmore. She was a graduate of Albert Lea High School. On May 15, 1946, she was united in marriage to James Neal Petersen at the Calvary Baptist Church in Albert Lea. Hazel was a lifelong resident of Albert Lea and had been employed by the Wilson Company, manager of the Fields Pizza Cellar and as a receptionist for the Albert Lea Medical Surgical Center. After retirement she was active as a volunteer for the Hospital Auxiliary and worked with the Albert Lea Community Theatre.

Hazel was a very active member of the First Baptist Church in Albert Lea. She also loved to read, ride motorcycle with Neal, cross stitch and ceramics, but her favorite pastime was spending time with family and the grandchildren.

Hazel was preceded in death by her parents; son, Dennis; grandchildren: Derek and Caitlin Petersen; and brother, Howard Whitmore.