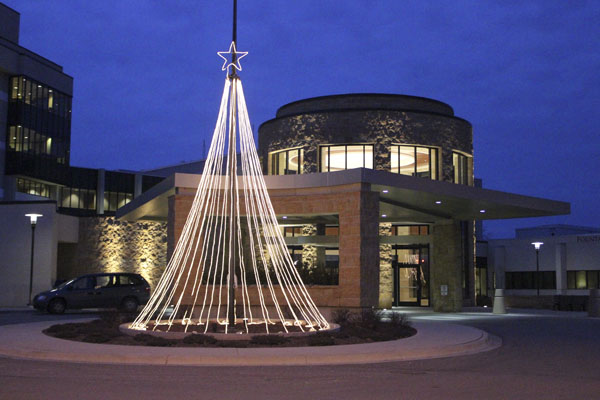 Mayo Clinic Health System in Albert Lea’s Hospice program recently held its “Set Memories Aglow” tree-lighting ceremony and has raised more than $3,700 for its program this year from selling the bulbs.

Renae Meaney, hospice coordinator, said they sell the bulbs each year for $5. The bulbs represent the remembrance of a loved one who’s been in hospice care. Meaney said people sometimes buy multiple bulbs to remember someone the lost, buy them for friends or buy them for loved ones who are still alive.

“It’s just to show appreciation for a loved one,” Meaney said.

Each year they hold the tree-lighting ceremony on the first Sunday in December; this year’s event was Dec. 4. Meaney said hospice volunteers make treats and after the ceremony everyone heads into the hospital for fellowship. About 50 people attended this year’s event.

“Lots of family members come to that,” Meaney said.

The funds raised each year go to a variety of things. One example is bereavement services, which Medicare doesn’t provide. Meaney said the family of any patient who dies is offered some form of bereavement care if they choose for up to a year after the loved one’s death. Kinds of care include resources, grief support groups and spousal support groups.

“It’s an option they can choose to be part of,” Meaney said.

Funds raised are also used to help support those who can’t afford hospice care if insurance doesn’t cover it. Meaney said hospice care is provided to anyone who wants it.

“We never turn anyone away,” Meaney said.

She said often people don’t understand what hospice care is and explained it focuses on quality-of-life care for patients and care for families after the patient’s death.

Each year hospice also holds a memorial service in November where they read the names of people who have died in the past year. They light candles, volunteers sing and a speaker talks about grief and loss. Meaney said she appreciates having these types of events to help families cope with loss and to recognize and memorialize the deceased.

“The services are really nice in supporting families,” Meaney said.