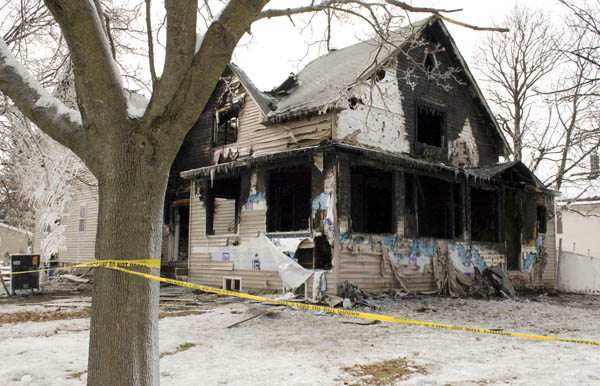 Most of the inside of this house at 403 Fifth Ave. W. sits blackened Wednesday afternoon after a fire. -- Sarah Stultz/Albert Lea Tribune 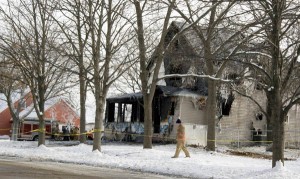 A firefighter walks around a house destroyed by fire at 403 Fifth Ave W. in Ellendale on Wednesday afternoon. The house is a total loss. -- Sarah Stultz/Albert Lea Tribune

Authorities have not stated whether the fires were related or if any foul play was involved.

The house is owned by Mark and Sara Misgen, owners of Maggio’s Pizza in Ellendale. The couple has four children.

According to a Sheriff’s Office news release, the first fire, in the kitchen, was reported at 1:53 a.m. when one of the homeowners came home and saw smoke.

The release states the fire was extinguished, the house was ventilated and then it was turned back over to the homeowner after it was deemed safe.

At 3:53 a.m., a passer-by contacted the Sheriff’s Office to report a second fire at the same house. 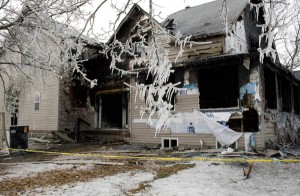 Icicles hang from the trees next to 403 Fifth Ave. W. that was destroyed by fire Wednesday morning in Ellendale. -- Sarah Stultz/Albert Lea Tribune

Ellendale Fire Chief Jeremy Reese said when firefighters arrived, the house was completely engulfed. He did not know how long the fire had been burning.

No one was home at the time, and no one was injured.

Reese said firefighters from Ellendale, Geneva, New Richland and Hollandale battled the blaze for nearly four hours. A few firefighters were still at the house Wednesday around noon, awaiting the arrival of a fire marshal.

An emergency shelter was on hand to give firefighters a warm place to take a break.

The Steele County chapter of the American Red Cross assisted the family.

As of Wednesday afternoon, a Christmas drive had also been set up by friends of the family for anyone wishing to donate gently used and new toys, clothing, money or gift cards.