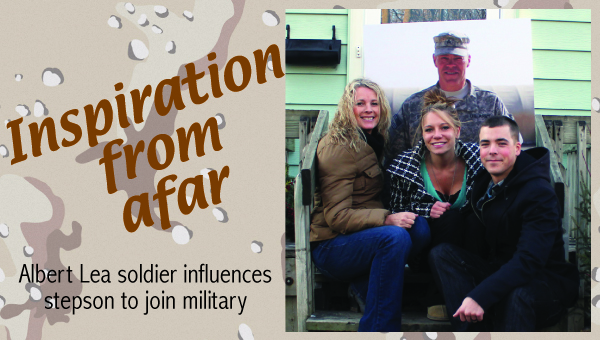 Jordan Mossman sits with his wife, Ashley, and mom, Gail Springborg. They had a large poster made with Dan Springborg’s photo so he could “attend” the Mossman’s wedding on Nov. 26; he couldn’t be there in person because he’s deployed in Kuwait with Albert Lea’s Delta Company. -- Kelli Lageson/Albert Lea Tribune

An Albert Lea man has had a big influence on his stepson’s life, but has had to miss some milestone moments because he’s deployed overseas in Kuwait.

Sgt. Dan Springborg is in Albert Lea’s Delta Company and stationed in Kuwait. He was featured in the Tribune’s “Deployed in Kuwait” series on Nov. 11. His experiences and advice helped his stepson, Pvt. Jordan Mossman, 24, want to join the military.

“Dan was a huge inspiration,” Jordan said. “The Army has done great things for him.”

Jordan’s mom, Gail, and Dan have been married for about a year and a half. Jordan’s known Dan for about three years and said he looks to Dan as his dad. He’d been thinking about joining the military for a while, but when he saw how it enhanced Dan and his mom’s life it was an easy decision.

“Seeing what he’s been able to accomplish and how much it’s improved his and my mom’s life — it’s a prime example for what I want to do for my family,” Jordan said.

Jordan just graduated from AIT, or Advanced Individual Training, at the end of November. He went to Fort Sill in Oklahoma for basic training, had a few days off and started AIT immediately after. Jordan trained to be a fire direction specialist, which means he helps track troop movements and works with computer systems within a field artillery unit.

Dan had to miss both graduations, which was hard for Jordan since Dan was his big motivator. Jordan was an honor graduate from basic training and in the top 10 percent of his class. He also was a distinguished honor graduate from AIT, after getting 100 percent on every test he took. He said Dan’s advice helped him to succeed in the trainings, and he hopes to continue to do well in the Army.

Gail said Dan enjoys what he does while deployed and is happy to be serving the country. He told her he was on a mission over Thanksgiving and it didn’t bother him at all knowing that he was working so others could enjoy the holidays with their family. What really affected him was missing Jordan’s wedding on Nov. 26.

“It was really hard for him — missing the wedding hurt,” Gail said.

Jordan married his fiancee, Ashley, and said it was hard for them not to have Dan at the event. They had originally hoped he would be able to video chat with them for part of the day, but since Dan was on a mission it was impossible. They decided the next best thing was to blow up a photo of Dan on poster board. Jordan said everyone took turns dancing with the photo and it had its own seat at the wedding.

“It was hard not having him there, but we understand what he’s doing,” Jordan said.

Jordan doesn’t know the next time he’ll see Dan because he’s leaving today for a two-year tour in Korea. He has an eight-year contract with the National Guard and is in the Active First program, where he’s in Active Duty Army for his first three years. He hasn’t been assigned a unit yet, but will go through processing and join a unit once he starts his tour.

His wife, Ashley, plans to join him in Korea in a few months and live there with him until his tour ends. Though they don’t know when and it will depend on when Dan’s deployment ends, Gail and Dan definitely want to visit Jordan and Ashley.

“Dan’s already said we’ll be taking a trip over there,” Gail said.

When Jordan’s tour ends he doesn’t know exactly where he and Ashley want to settle down. He’s been living in St. Cloud, but they’re considering moving closer to Dan and Gail. It will all depend on where he’ll be with the Minnesota National Guard when he returns as well.

For right now he and Ashley are excited to get to Korea. Gail’s proud of both of them because they’ve set goals for the two-year tour. Ashley may try to find a school to work on her college degree, and she and Jordan have their eye on traveling to other countries nearby like Thailand, China or Japan, among others.

“We’re hoping to learn some Korean and some customs and traditions of Korean culture,” Ashley said.

Jordan doesn’t know yet where his experience in the Army will take him, but he said he’s learning a lot of skills that will transfer easily to his civilian life. Gail said she’s happy for Jordan that he’s been able to enhance his abilities and follow in Dan’s footsteps.

“I am so proud of Jordan,” Gail said.