Funeral services for Juanita “Mickey” Torgerson, 86, of Albert Lea, will be held at 11 a.m. Saturday at Bayview/Freeborn Funeral Chapel. The Rev. Debora Miller will officiate. A lunch reception will follow at the funeral home. Interment will be at Greenwood Cemetery in Glenville. Visitation will be from 9 to 11 a.m. Saturday at Bayview/Freeborn Funeral Home. To sign the guest book, go to www.bayviewfuneral.com. 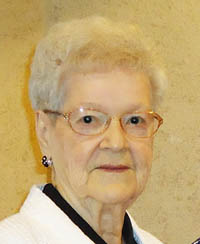 Juanita “Mickey” Torgerson, 86, went to be with the Lord, surrounded by her family, on Friday, Dec. 2, 2011, after waging a strong battle against cancer and heart disease.

Mickey was born on Jan. 26, 1925, in Hamilton, Ohio, to Burley B. and Martha (Hacker) Bowling. She grew up in the Leon and Latham, Kan., area where she played high school basketball and won the state ping pong championship. After graduation, she moved to Louisville, Ky., with her family. She drove taxi during World War II, and that’s how she met the love of her life, Ervin Torgerson, at Fort Knox. They married on Feb. 7, 1946, in Kentucky and later moved to Albert Lea where they made their home and raised a daughter, Sharyn, and son, Larry.

Mickey was a loving wife, devoted mother and proud grandmother and great-grandmother. She loved God and devoted herself to growing in her relationship with Christ. Through the testimony of her life, and the time she spent with others, she helped numerous people. Her love of life, which she expressed through a wide variety of interests, was evident to everyone around her. She enjoyed traveling, fishing and reading. She was known as the “Chili Lady” for the many gallons of her famous hamburger chili she made throughout the years for the Glenville United Methodist Church and The Albert Lea Order of the Eagles.

She was a proud member of Albert Lea’s Camper Club, Order of the Eagles, United Methodist Church Women, and she volunteered tirelessly for Senior Resources and RSVP.

Mickey worked in a variety of jobs in Albert Lea throughout the years to support her family. She was a notable cook.

Her passing has left a deep void in the lives of her family and many friends. It’s hard to overstate the number of lives she touched. Her dedication to helping others, and the strength of her faith, even in the face of her recent struggles, serve as an example to all those she leaves behind. Mickey will be remembered by the life she lived for Christ, the example she provided for many and her faith, humor, patience, good nature and self-sacrifice.

She was preceded in death by her husband, Ervin A. Torgerson; her parents, Burley B. and Martha Bowling; brothers: Blaine, Jimmy Bryan, Wesley and John; and sister, Janet Ruth.

Memorials on Mickey’s behalf can be made to organizations which help fight cancer and heart disease.