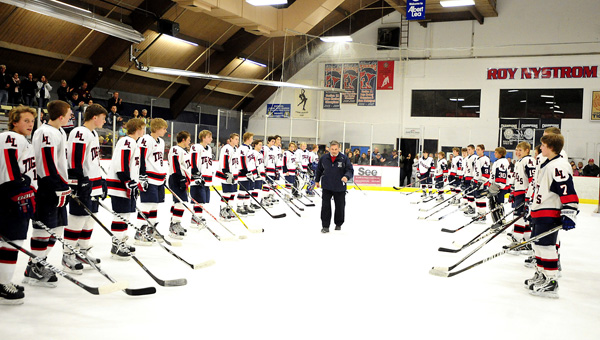 The Albert Lea boys’ hockey team dropped its season opener on Thursday night for the first time in seven years.

The stoic, longtime head of the Tigers program said there’s still a lot of hockey to be played this season.

“How you’re playing at the end of the season is what’s most important,” 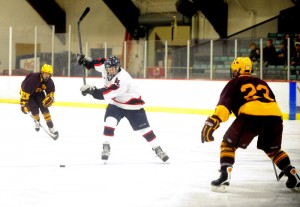 Albert Lea sophomore Lucas Peterson takes a shot on goal during the third period of a 7-2 loss to Northfield at Roy Nystrom Arena on Thursday night. -- Brandi Hagen

The Northfield Raiders (2-0) capitalized on two power plays and scored four first-period goals en route to a 7-2 rout of the Tigers at newly dedicated Roy Nystrom Arena. Albert Lea (0-1) outshot Northfield 42-33 for the game, including a 21-10 advantage in the second period, but could muster only two goals against the Raiders’ stingy defense.

“That goaltender (Isaak Tjaden) was giving up a lot of rebounds and we were getting a lot of second, third shots.” Nystrom said. “But we weren’t hitting the corners of the net, either. You don’t score if you don’t hit the corners.”

Nystrom was honored before the game and joined at mid-ice by his family as the City Arena’s Blue Rink was officially renamed Roy Nystrom Arena. Nystrom said his family would cherish the honor and that it was a “humbling” moment. 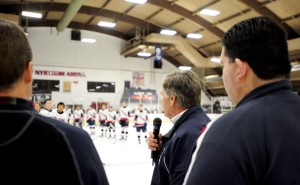 this program and its been enjoyable,” said Nystrom, who’s won 633 games in his coaching career. “There’s not too many guys who last 39 years in one town anymore.”

Once the brief ceremony was over, Nystrom focused and winning No. 644 and was blunt about his team falling behind 4-0 after the first period.

“I told them that’s probably one of the worst period I’ve seen in a long time,” Nystrom said. “We had to regroup and to their credit we came out in the second and we played pretty well.”

The Tigers wasted little time after the first intermission to try and chip away at the Raiders’ lead.

Nate Stadheim scored the team’s first goal of the season off an assist from Auston Larson to cut the lead to 4-1 just two minutes and 52 seconds into the second.

Brady Falk added another goal 7:51 into the period on the Tigers’ second power play off assists 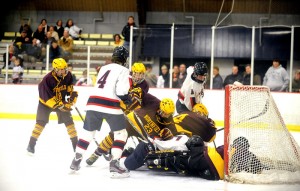 Tigers players scramble to attempt to score a goal late in the game on Thursday against Northfield. -- Brandi Hagen

from Andrew Thompson and Larson. The score cut Northfield’s lead to two and breathed new life into the home team.

“We were forechecking a lot better and we were getting to the net,” Nystrom said. “In the first period we didn’t get to the net hardly at all. I think we kind of rattled them up, they started making some bad passes in their own end of the rink and we took advantage of them.”

It looked as if the Tigers were headed into the second intermission with momentum and a two-goal deficit before the Raiders took the wind out of their sails for good.

Senior forward Joshua Sonnee scored his second goal of the game at the 12:07 mark off an assist from Alex Morsching to extend Northfield’s lead to 5-2. The Raiders’ Andrew Scofield added two more in the third for a four-point hat trick and the 7-2 win.

Nystrom said despite the loss he was pleased with how his team fought until the end against the more experienced Raiders.

“One thing I will say about our kids is that we didn’t give up, we kept playing,” Nystrom said. “(Northfield) is a pretty seasoned team and give them credit they’ve got a nice club.”