Packers surge past Tigers in 2nd 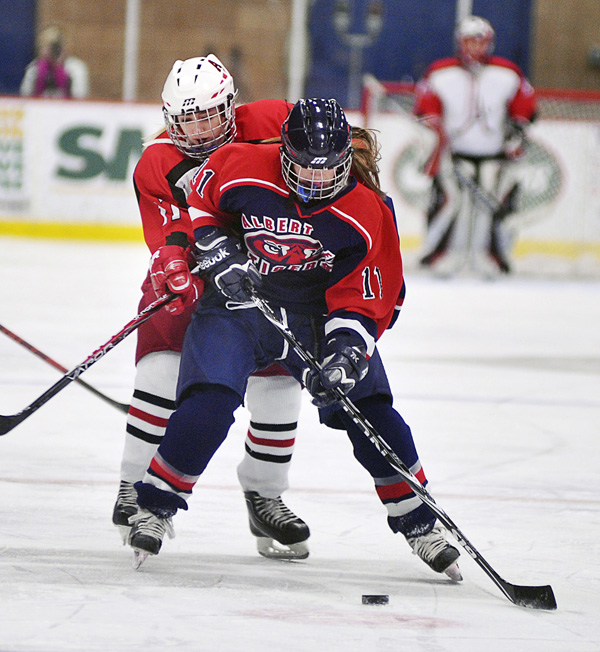 Albert Lea's Anna Anderson fends off Austin's Abby Gallaher as she tries to play the puck in the first period Tuesday night in Austin. -- Eric Johnson

By Andrew Dyrdal and Rocky Hulne

AUSTIN — Consecutive goals gave the Albert Lea girls’ hockey team a lead on Tuesday against Austin, but a second-period surge gave the Packers a 5-2 win at Riverside Arena.

After falling behind 1-0 in the first, Hannah Savelkoul tied the game for the Tigers at 14:08 off assists from Mackenzie Waldemar and Sydney Overgaard.

Natasha Moyer scored a power-play goal off an assist from Anna Anderson at 3:48 to give Albert Lea a 2-1 lead.

Austin’s Carley Grunewald scored the second of her three goals less than a minute later, and the Packers took the lead for good with 7:02 left in the second when eighth grader Teigen Petersen got her stick up to redirect a slap shot from Vanessa Talamantes. The puck ended up in the net and it was Petersen’s first varsity goal in her first game at forward.

“I just moved her to forward from defense because I wanted to get her more ice time,” Austin head coach Denny Bray said. “She was so worried about playing forward and I told her there’s nothing to worry about. She’s pretty happy now.”

Grunewald scored a hat trick on a power play at 16:35 in the second, and Kennedy Thompson scored an empty netter with 25 seconds remaining to make it a 5-2 final.

“We thought they would come out strong against us, considering they haven’t won a lot this year,” said Austin’s Abby Gallaher, who had four assists. “Since we weren’t as good last year, they probably didn’t think we’ve improved much, but we sure have.”

The Tigers’ fifth-straight loss dropped its record to 1-7, while the Packers are off to a 5-2 start, one victory away from reaching its win total from last season.

Grunewald, Thompson and Gallaher all have now had hat tricks this season, but Grunewald’s not about to start looking for her shot any more often. Grunewald’s first two goals came on rebounds and her last goal, which made it 4-2 with 25 seconds left in the second period, came on a double clutch, slap shot on a power play.

“I’m not the strongest shooter on the team and I can’t aim at all,” Grunewald said. “I just wait for it to come back out. We don’t really care who scores, we’d rather have everybody touch the puck before we score.”

While Austin came out a little sluggish in the first period, Bray said his team played its best period in the second. He was glad his team didn’t overlook the Tigers due to their record.

“No matter what their record is, they’re going to come hard,” Bray said. “They’re record isn’t how they play. They’ve got a new goaltender and she’s learning.”