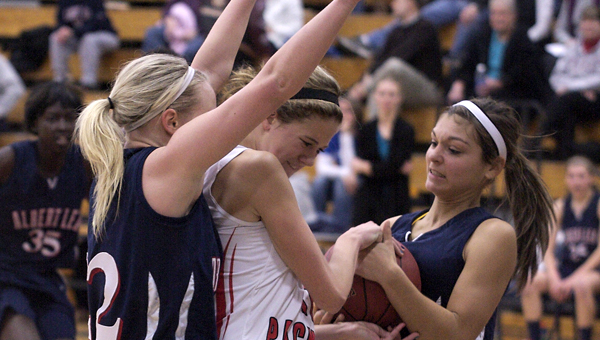 Bryn Woodside and Ashley Tewes try and steal the ball from an Austin player Tuesday. The Tigers lost to the Packers 57-51. -- Brandi Hagen

Albert Lea’s Tiffany Johnson and Bryn Woodside each scored 11 points Tuesday during a 57-51 loss to the Austin Packers.

Johnson shot 40 percent from the field and Woodside 33 percent with three assists.

In the end, it wasn’t enough to keep up with Austin’s top scorers. Jenna Svoboda had 20 points with three assists and Babaye Oja 18 points and two assists.

In the first half, Austin had a lead of 15-8 before the Tigers went on a run with seven minutes on the clock. They racked up 18 points before the Packers could score again. 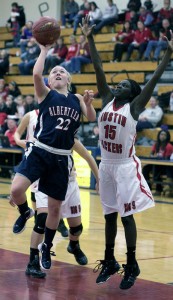 Bryn Woodside does a layup Tuesday during the game against Austin. Woodside scored 11 points and three assists. --Brandi Hagen

“It’s natural human tendency that if you’re shooting well or you’re getting steals, you play harder,” said Albert Lea coach Sean Gillam. “The hard part as a player is to get your intensity up when that isn’t happening.”

Johnson scored nine of her points in the first quarter, Woodside seven and Sydney Rehnelt four of her total seven.

When the dust settled, the Tigers led 29-22 at halftime.

Albert Lea was struggling to hang onto their lead after the Packers opened the second half with six points. Gillam said he believes that was the point the game was won and lost.

He said the Packers came out of the locker room with more intensity than his own team, did and because of it the Tigers were just trying to rebound from that point on.

“It’s like a fight when you play basketball,” said Gillam. “It’s the guy that gets the first shots in and staggers you. We did that in the first half, we staggered them, but we couldn’t put them down. We needed to hit that knockout punch. That’s when all the heads went down.” 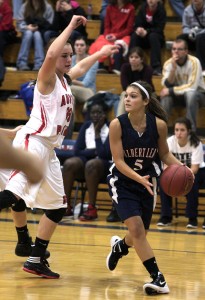 As the clock ticked under 13 minutes, Austin took over the lead with a one point advantage, 38-37.

Albert Lea kept falling until they were down by nine points with less than five minutes of the game to play. A last chance at a comeback, the Tigers fought harder than they had the entire second half and brought the score to 54-51 with one minute remaining.

The end of the game was stretched out as each team took turns shooting free throws because of fouls. Austin scored the last three points of the game.