Panthers run away from Rebels 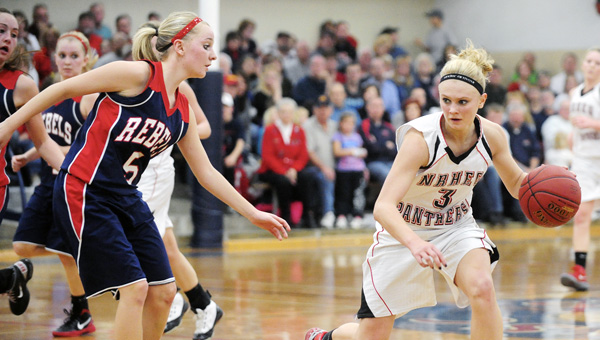 Carlie Wagner did her best to erase them. 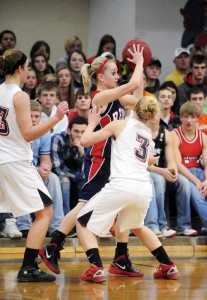 United South Central’s Katie Ovrebo looks to pass the ball during the first half of a 65-46 loss to NRHEG. -- Andrew Dyrdal

The sophomore guard scored 38 points as the Panthers turned an 18-2 start into a 65-46 win on Friday against United South Central in Wells.

The Panthers suffered its only Gopher Conference loss last season in Wells and Wagner said redemption was in the front of her teammates’ minds before the game.

“That’s what our focus was,” Wagner said. “We remembered what they did to us last year here so we came into it with a lot of confidence.”

That confidence turned into an 16-point lead just four minutes into the game after Wagner strung together 10 straight points in a three-minute span.

Wagner went on to score 20 of the Panthers’ final 28 points heading into halftime, and also chipped in six rebounds and five assists.

The Panthers were outscored 23-16 by the Rebels after its surging start but finished with a 31-21 advantage in the second half.

“I’m proud of the girls for playing as a team,” Panthers coach John Schultz said. “They were so unselfish again almost to the point that is creates turnovers.”

The Panthers had 18 turnovers to the Rebels’ 28.

The Panthers’ Tori Raimann opened the game with a 3-pointer and knocked down another two possessions later as NRHEG built a 10-2 lead after two made Wagner free throws and forced a Rebels timeout just 2:08 into the game.

“The girls were a little bit too excited,” said Rebels coach Stu Hendrickson, who returned only one starter off last year’s team. “We came out and made a lot of turnovers from trying to do much. A couple of our players haven’t been in this situation before.”

Wagner scored eight more points to build the lead to 18-2 before USC finally began chipping into the lead. The Rebels’ Hannah Goemann knocked down a free throw for one of her 13 points before Kristie Ovrebo made a 3-pointer from the baseline. The Rebels strung together a 7-2 lead and forced a Panthers timeout with 7:55 remaining in the half.

Wagner scored a layup out of the timeout, but Ovrebo, who had eight first-half points, made another 3 as part of a 10-3 run to pull the Rebels within 29-22 with three minutes remaining in the half.

“You can’t dig a hole like this against a good team,” Hendrickson said. “We fought back, made it closer and had some chances early in the second half. I’m proud of our effort and the fight that we showed to come back.”

The Rebels kept the pressure on the Panthers after the break, pulling within 36-31 after six straight points from Amanda Allis.

An and-1 layup from Wagner on one possession and a steal and layup on another extended the Panthers’ lead back to 44-35 and the Rebels never got closer than nine again.

“I think we could have played better,” Wagner said. “We didn’t really play our game but we played well enough. We had too many turnovers and didn’t play smart at times but we took off at the end.”

The Panthers’ Jade Schultz scored all nine of her points from beyond the arc and finished with 10 rebounds. Anna Schlaak grabbed a game-high 15 rebounds.