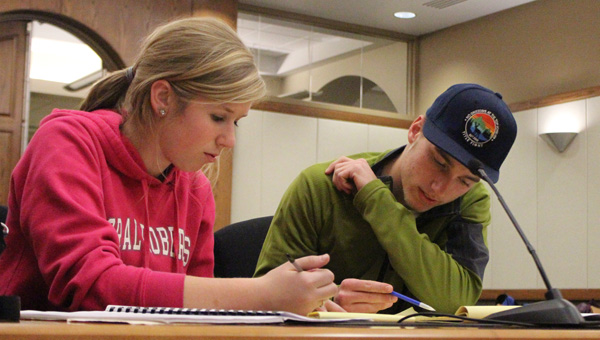 Unlike most other schools in its region, Albert Lea High School’s mock trial program is growing rapidly. 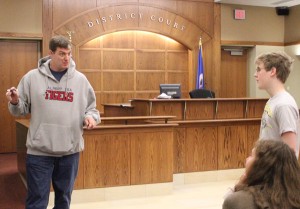 Coach Neil Chalmers works with Mark McGivern, standing, and other mock trial team members during a recent practice at the Freeborn County Courthouse.

The mock trial program has doubled since last year from two teams to four that will compete this year. The teams, which are made up of about 40 students, started practicing seriously in the last few weeks.

The teams start competition in January. The case they have to know inside and out is Detective Rook E. Greenwood vs. Chief Billie Durden, a made-up case. The jist of the case is that Greenwood is claiming he was wrongfully fired for a statement he made on a social networking site; Durden is claiming Greenwood was fired for poor job performance.

Mock trial members must know the case well and be able to perform as the prosecution or the defense because on competition days there’s a coin toss that dictates which side they’ll argue. During practices and invitationals that’s all the team does is work on trying both sides of the case.

“We try the case a number of times,” Chalmers said. “We also do scrimmages.” 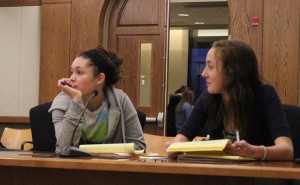 “Our goal is to practice well and perform what we practice,” Chalmers said.

The captains are seniors Macy Paul, Sam Klapperick, Annabelle Randall and Addison Peterson. Paul and Klapperick have the same goal for this season.

“My personal goal is to go to the Owatonna tournament and win first place,” Paul said.

Klapperick said that she likes having so many other students interested in the program. Other schools in the same region as Albert Lea don’t have any mock trial teams.

“Our region is so spread out,” Klapperick said.

Both said they enjoyed competing against a national champion during the state tournament last spring.

“It makes us better when we compete against those teams,” Klapperick said.

Because of the size of the program the teams will have some assistant coaches including Natalie Runden, Megan Ziebell, Tamara Murphy and Samantha Klukow. Chalmers said he hopes to possibly have a middle school team some day as well.

“We want to have kids involved,” Chalmers said. “It’s great to have a bunch of kids.” 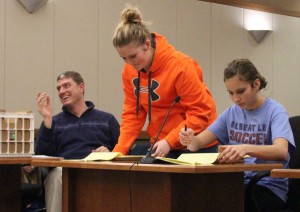 The only setback is that having more students in the program increases transportation costs, which is basically the program’s only expense. Chalmers said the students have done some fundraising, and their goal is to raise about $450 to be able to travel to competitions.

Chalmers said the team has had great support from the community including use of Freeborn County District Courtrooms for practices and competitions. He said police department employees and lawyers in the community have also helped the students understand parts of the case and help with their arguments.

Mock trial teams will compete in Albert Lea on Jan. 27. Teams will compete at 9 and 11 a.m. at the Freeborn County Courthouse. Regional and sectional tournaments are in February, and the state competition will be in March in Olmsted County.