Quist: ‘Walz is part of the problem’ 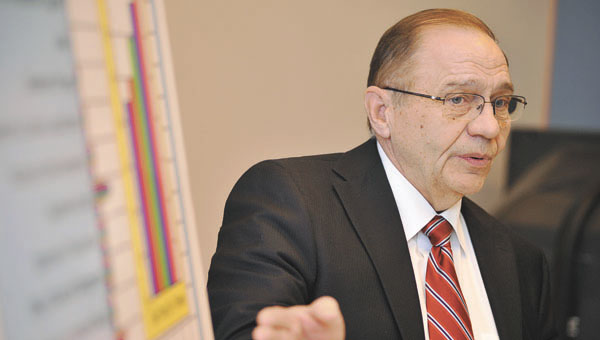 Allen Quist spoke about his run for Congress Thursday afternoon at the Austin Public Library.

AUSTIN — Former Minnesota state representative Allen Quist thinks he’s got what it takes to be a U.S. Congressman.

Quist, a Republican from rural St. Peter, announced his bid for Democratic Congressman Tim Walz’s First District seat this week, and he stopped in Austin Thursday to talk to residents about why he’s the right man for the job.

“Washington is broken, and Tim Walz is part of the problem,” Quist said, speaking at the Austin Public Library. “I intend to be part of the solution.”

Quist said Washington needs his leadership and willingness to think independently in order for the country to progress. If elected, Quist said his main priority is to balance the federal budget in six years.

In order to meet this goal, Congress needs to set yearly spending limits, he said.

“The key is setting the limit and prioritizing,” Quist said. “I can make a significant difference.”

The Republican candidate said he wants spending cuts to come in the form of ending corporate bailouts, eliminating overhead in the Department of Education and continuing to work toward affordable health care reform.

He also emphasized the importance of expanding the economy and creating jobs while concurrently reducing the deficit.

“We’re six years away from being where Greece is today,” he said. “Finding solutions demands this trend be stopped.”

Quist is competing with state Sen. Mike Parry, R-Waseca, for the 1st District Republican endorsement. He said he is more suited for the job because Parry is needed in the Minnesota Senate to help Republicans hold their majority.

“We should do everything we can to uphold that,” he said.

Quist is hoping his leadership and previous work in the Minnesota Legislature will win him the endorsement.

“You’re looking at somebody with extraordinary leadership,” he said. “I’m fiercely independent … and I will take the lead.”