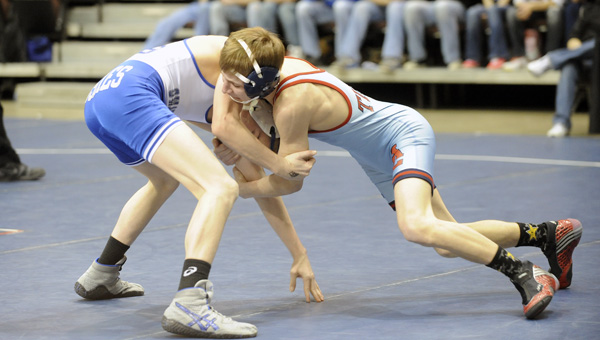 Within a newly-realigned section, this season’s Albert Lea-Owatonna dual has serious postseason implications.

“This is probably the only time we’re going to face Owatonna in a dual meet this season,” Tigers coach Larry Goodnature said. “So it will be huge for seeding.”

Sixth-ranked Albert Lea wrestles at No. 8 Owatonna at 7 p.m. on Thursday. The winner will not only have an edge in the conference title chase but also in securing the No. 1 seed in Section 1AAA. With third-ranked Hastings added to the section this season, the tournament’s No. 2 and 3 seeds will need to beat highly-ranked opponents back-to-back on Feb. 18 to advance to state.

The rivalry also has a different feel this season because its being wrestled a month earlier than in years past. The Tigers and Huskies squared off last season on Jan. 14, which gave both teams time to find its best lineup and its wrestlers to ease into more long-term weight classes.

Of course, Goodnature knows the schedule change affects both teams.

“We’re both in the same boat,” said Goodnature, who preferred last season’s schedule. “I’m sure (Owatonna’s coach) Cliff Casteel would rather wrestle at the end of the season, too.”

For Casteel, this will be his first time facing Albert Lea as Owatonna’s coach. Casteel replaced longtime coach Scot Davis, who resigned at the end of last season before facing a two-year suspension for recruiting. Casteel previously coached at Northfield for 10 seasons and led the Raiders to its first state tournament berth in 61 years during the 2009-10 campaign.

He said wrestling is a marathon and each team’s lineup on Thursday will likely look much different in February.

“A lot can happen throughout the season,” Casteel said. “At the same time, the outcome of this dual will likely impact the seeding for the Section 1AAA Tournament.”

While Casteel will experience an Albert Lea-Owatonna match matside for the first time, he isn’t unfamiliar with the rivalry.

“A few years back I attended the Owatonna-Albert Lea dual as a spectator in the Owatonna High School gym,” Casteel said. “On several occasions I’ve watched the two teams compete for a section championship in the Rochester Civic Center.”

Casteel added that as a “huge” fan of wrestling, he’s watched Goodnature’s teams develop since 1998.

“I know Albert Lea is returning several section champions and the greater part of their team from a year ago,” he said.

The Huskies return six wrestlers from its lineup that lost 28-21 to the Tigers in the section finals last season, and Albert Lea returns eight. The Tigers’ eight returners wrestled in the nine lowest weight classes last year and five notched wins over the Huskies while clinching a state tournament berth.

Both team’s lineups will look much different this time around.

Many of the Tigers wrestlers have jumped up multiple weight classes since last season, including arguably the team’s top wrestler, senior Dalton Westerlund, who’s currently wrestling at 182 pounds after finishing fourth at 145 in the state tournament last year. Dakota Wangness, who was ranked as high as No. 3 at 103 last season, has wrestled at 126 this year.

Westerlund and Wangsness are just a couple of many examples, but both said they’ve so far had no problem adjusting to opponents who are much stronger than those they’ve faced in the past.

The Huskies and Tigers entered the season ranked sixth and ninth, respectively, but Albert Lea leapfrogged Owatonna in the latest ranking released on Friday after an impressive start to the season.

The Tigers enter Thursday’s match 7-0 with wins over three ranked opponents: No. 5 Coon Rapids, No. 10 Anoka and No. 12 Centennial.

Owatonna is 9-0 with a win over Class AA’s ninth-ranked Monticello.

This is the second straight season Albert Lea and Owatonna have matched up evenly against each other, considering the Huskies beat the Tigers 36-16 and 46-7 during the 2009-10 season. Last year, the then sixth-ranked Tigers avenged those lopsided losses with a 35-15 over No. 3 Owatonna during the regular season on Jan. 14.

Goodnature said like last season, this year’s matchup will come down to securing bonus points.

“That’s going to determine the winner, especially if we split seven matches apiece, which this match could easily become,” he said. “So it’s going to come down to bonus points — which team can get the falls and which team can stay off their backs.”

With three ranked wrestlers in the five lowest weight classes, the Tigers could get out to an early lead over the Huskies heading into the middle and upper weights, where on paper, the Huskies have the advantage.

Albert Lea junior Dakota Wangsness, who’s ranked eighth at 120 pounds, said the team will need bonus points early to set itself up for a win.

Dalton Westerlund said a fast start would give the team’s heavier wrestlers momentum.

“I think a lot of our lower weights can get pins and bonus points,” Westerlund said. “If they do that it will give the upper weights more fire to do better, too.”

Goodnature said his message to his team is the same as it’s always been when it faces Owatonna.

“I just tell the kids, ‘This is going to be a fun match with a great crowd watching you. We’ll have just as many fans as Owatonna so feed off the excitement. Wrestle your very best and don’t be nervous. Just go out there and have fun.’”

Here’s a list of Albert Lea’s returning varsity wrestlers and how they performed last season against Owatonna in the Section 1AAA finals.