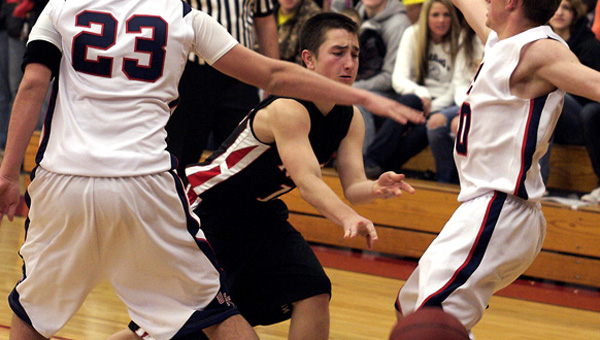 USC players, Cole Stencel and Trey Allis block NRHEG's, Nic Mangskau from getting to the basket with the ball Friday at New Richland. -- Brandi Hagen

USC took the lead in the first half scoring 15-6. With less than seven minutes left, NRHEG played catch up and was able to close the gap 18-14.

With six minutes to go, Kyle Bauman found a seat on the sidelines because of foul trouble. 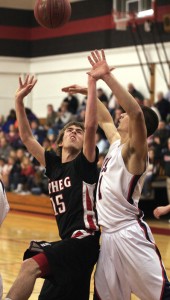 Spencer Hanna, NRHEG, fights against USC's Jason Huper for the rebound. Hanna had two points for the game and Huper five. -- Brandi Hagen

“That was when we needed to grind it out, get shots on the pavement, when the 6-foot 8-inch guy wasn’t there to block them,” said NRHEG coach Pat Churchill. “We just didn’t do that, we let them go on a little run and that really hurt us.”

During the second half, the game was at a stand still with neither team really scoring any points for the first four minutes.

NRHEG’s playing started looking up when Sam Lundberg and Nic Mangskau each made a 3-pointer. Even though USC was still leading, the Panthers’ attempt at a comeback brought the score within eight points of each other. The score was 35-27 with just under 11 minutes left to go.

USC didn’t let it get to them. With 4 1/2 minutes left in the game, they took a 17-point lead toward their win. 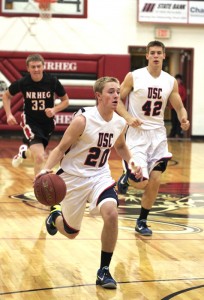 USC's Trey Allis takes off down the court after a rebound. Allis scored 10 points towards the win against NRHEG Friday at New Richland. --Brandi Hagen

Churchill made sure not to let the loss get his team down because it was still improvement from their last game. Before shaking hands with the opponents, he praised them for their good effort.

“I was very happy with the outcome,” he said. “I was disappointed we lost, but our effort was outstanding. I told them to come out with some pride and play like they meant it. They did that tonight and I wanted them to know that.”