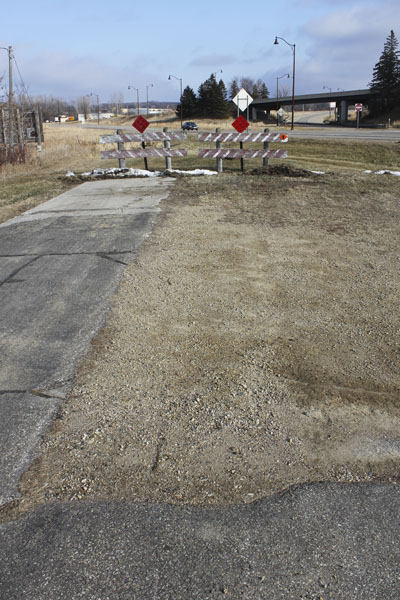 This is what the trail at the end of Steven Street looked like on Saturday afternoon. Traces of snow still exist from the Dec. 3 snowstorm. It is one place that Albert Leans and visitors at hotels on Main Street get on the Freeborn County system of snowmobile trails. The county offers 250 miles of groomed trails, popular with locals and visitors. 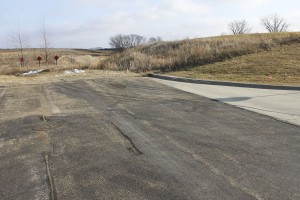 Another place riders sometimes leave Albert Lea from is the end of Consul Street near Home Depot. From here, they often ride to Myre-Big Island State Park and Albert Lea Lake.

He said that means some years will be sooner and some later. He recalled times when warm and dry spells provided brown Christmases but were followed by white Januarys.

“We certainly hope it doesn’t last too long. Everything just slows way down,” he said. “We suggest people do a snow dance.”

Freeborn County Snowmobile Trail Association grooms and maintains 250 miles of riding trails in Freeborn County. He said it takes three or four days to groom the entire system of trails.

However, they can’t begin grooming until there is about 8 inches of good snow, not the sloppy wet kind.

Any amount of snow less than 8 inches, then the groomer and the snowmobiles tend to get into tillage left in the farm fields.

The forecast this week calls for sunny skies, with the possibility of flurries on Thursday night. With high temperatures each day around the freezing mark lately, any snow that has fallen melts the next day or two. A big snowstorm on Dec. 3 brought 4 to 6 inches of accumulation, but that melted away a little bit each day in the following two weeks.

The trail system, once in place, does connect with neighboring counties. In fact, snowmobile riders can go all the way to Canada if they like. The trails connect south into Iowa. Freeborn County gets a lot of visitors from Iowa in the winter, either by riding their sleds here or hauling them up with a trailer.

The trail system started in the early 1970s, when members of the Freeborn County Snowmobile Trail Association acquired easements from landowners. Since then, some of the routes have been modified. In the 1990s, routes were abandoned and others added, so the number of miles pretty much have stayed the same.

Snowmobile riders tend to frequent the places that sponsor the snowmobile organizations. They like to go to the restaurants and fuel stations as they cross the countryside.

Christianson said the riders are good about getting on the trails and using them. If they are off the trails, it’s usually in the effort of getting from home to the trail or else they are riding on their own property.

“Businesses appreciate being on the trail system,” he said.

He also noted that he hopes the temperatures drop before the snow falls again so that the lakes freeze nice and hard. He said that allows the snowmobile riders to use the expansive open space on lakes, such as Albert Lea Lake adjacent to Myre-Big Island State Park.

“It’s good to get ice before the snow falls,” he said.