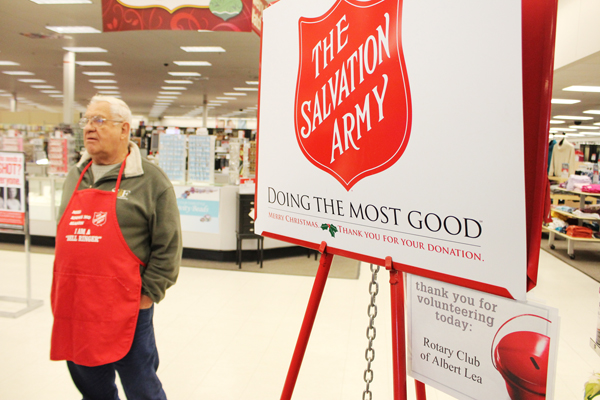 Bernie Benson rings bells by a Salvation Army sign that states who is ringing for the day. -- Danielle Boss/Albert Lea Tribune

Every year for the last four or five years, good friends Kenny VanRiper and Bonita Moeller have made it a tradition to help others during the Christmas season.

Wearing a red apron and with a Salvation Army bell in their hands, they stood Thursday inside the doors of Albert Lea’s Hy-Vee, greeting people as they came into the store. 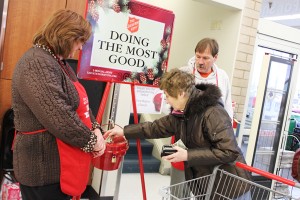 Bonita Moeller, left, and Kenny VanRiper thank a woman for donating to the Salvation Army.

“It’s very little sacrifice,” VanRiper said of his two-hour shift. “It’s something to do to give back to the community and those in need.”

While the pair ultimately sought to raise money for the nonprofit organization’s Red Kettle Campaign, they said they, too, benefited from the experience.

“It gives you a warm feeling in your heart,” Moeller said. “We have had very generous, giving people.”

VanRiper and Moeller are just two out of dozens of volunteer bell ringers seen around the community in the last few weeks as the Albert Lea Salvation Army is fundraising to reach a Christmas goal of $202,000.

Money raised goes to support local families in need of food, temporary shelter, rental and fuel assistance and budget counseling to help families achieve economic independence, to name a few of the services. 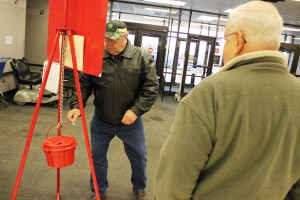 Bernie Benson watches a man put money into the kettle.

Bernie Benson, another volunteer who was ringing a bell at Shopko Thursday, said though he has not personally known someone who has benefited from the Salvation Army, he hears about the good the organization does for the community.

He was volunteering Thursday as part of the local Rotary club.

Local Capt. Jim Brickson said as of the close of the day Wednesday, about $91,000 had been raised toward the organization’s Christmas goal.

Brickson said this is a little bit behind the amount raised at this time last year, and he encouraged people to sign up to volunteer ringing bells around town.

There are still 252 open hours left before Christmas Eve. 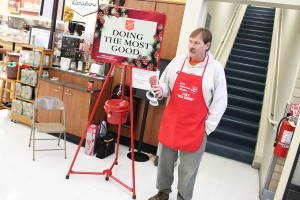 Kenny VanRiper rings bells at the front entrance of Hy-Vee.

“Every day we try to ring that bell to keep things on the ground,” he said.

The Salvation Army is also gearing up for its Christmas toy distribution on Wednesday and Thursday, where families in need will be able to receive assistance in shopping for children up through age 16. Toys come from donations through the community and area businesses.

Salvation Army Capt. Lee Brickson, Christmas distribution coordinator, said there have been about 1,100 children signed up to receive assistance, a number higher than ever before.

Donations are still being accepted for the distribution through Tuesday. 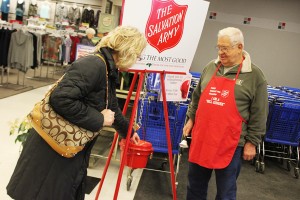 A woman puts a donation into the kettle at Shopko while Bernie Benson watches on.

“There’s so many of the people who used to donate to us, who are now receiving,” she said. “If you can afford to be generous, help a neighbor.”

• Donations are being accepted at the Salvation Army office, 302 Court St., Albert Lea.

• Angel Tree tags can be selected and gifts purchased for a girl or boy, age appropriate, and then returned to an Angel Tree location at Northbridge Mall, Walmart, Bonnerup Funeral Service and various area churches. Toys will be distributed to families in need Dec. 21 and 22.

For more information or to volunteer, call The Salvation Army at 373-5710.