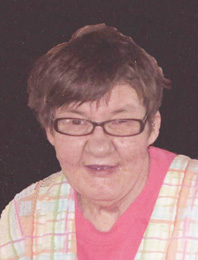 Rita was born in Albert Lea on Sept. 15, 1951, the daughter of Elmer Levi and Virginia (Means) Knutson. Rita attended the Bricelyn Schools. She lived in Bricelyn for many years until moving to Albert Lea in 1981. She worked in the laundry at Cedar Valley Services before her retirement. Rita loved doing artwork especially drawing and painting, which she would enter at the Freeborn Co. Fair. She was in Special Olympics doing bowling, swimming and track. She also was a bell ringer for the Salvation Army and enjoyed going to Diamond Jo Casino. Rita loved to take part in Bible studies. She enjoyed going on vacations with Sue and family. She loved her special cats, George and Brian. Rita enjoyed making and collecting friends.

She was preceded in death by her parents and brother, Russell Knutson.