Funeral services for Roger Fink will be held at 10:30 a.m. Monday at Bear Lake Lutheran Church. The Rev. Daphne Hamborg will officiate. Interment will be at Bear Lake Cemetery. Visitation will be one hour prior to the service at the church. To sign the guestbook go to www.bayviewfuneral.com. 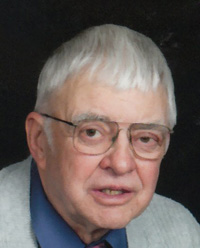 Roger Ferdinand Fink was born May 10, 1928, to Harold and Dora (Lutteke) Fink on the farm in Freeborn County. He grew up in Pickerel Lake Township and attended school in Mansfield Township, Pickerel Lake District 69 and Albert Lea High School, graduating in 1946.

Roger was drafted into the United States Army in 1951. Five months later his father died and he was released to take care of the family farm. He milked cows until 1963 when his brother, Steven, left for college. For the next 16 years he was a hog farmer. After his mother’s death, they sold the family farm and Roger moved to Albert Lea in 1979 and worked at the Albert Lea Family Y in building maintenance for many years. On June 9, 1984, Roger was united in marriage to JoAnne (Quam) Wangen at Bear Lake Lutheran Church. Roger was a lifelong member of Bear Lake Lutheran Church, where he was baptized and confirmed. He spent many years teaching Sunday school and he was also the Sunday school superintendent for 23 years. He enjoyed photography, coin collecting, gardening and traveling. Roger was a member of the Freeborn County Historical Society and was very interested in genealogy.

Roger was preceded in death by his parents; sister, Deloris (Lane) Lee; and brother Steven Fink; and brother-in-law, Richard Mattick.

Memorials are preferred to the Bear Lake Cemetery Association or the Freeborn County Historical Society.