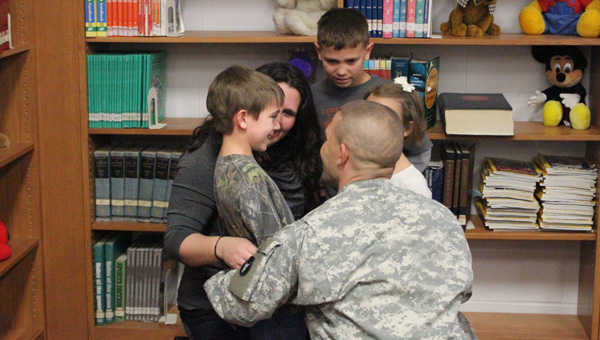 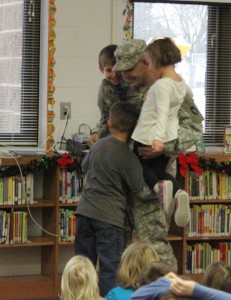 Sgt. Thomas Estes surprises his children, Cole, who's standing, and Hannah and Blake who are in his arms. Their mom, Tammy, set up the surprise on Monday at Northwood-Kensett Elementary School.

Sgt. Thomas Estes, of Albert Lea’s Delta Company, surprised his kids Cole, a third-grader, Blake, a second-grader, and Hannah, a kindergartner, at a special assembly Monday afternoon at Northwood-Kensett Elementary School. Estes is home on a two-week leave from his deployment to Kuwait. Tammy, their mom, set up the surprise after finding out when her husband would be home on leave.

Tammy worked with several teachers who didn’t mind that everything had to be planned last-minute. They found out for sure Thursday that Thomas would be flying in on Sunday and the surprise could happen Monday. Tammy was just hoping to be able to have Thomas go into each child’s classroom to surprise them, but the teachers wanted to do more.

And so an assembly for kindergartners through third-graders was planned. Principal Brian Costello told the children the assembly was to celebrate all American soldiers. The students listened to “American Soldier” by Toby Keith and “God Bless the U.S.A” by Lee Greenwood before the second-graders sang “The Star Spangled Banner” and third-graders sang “God Bless America.” 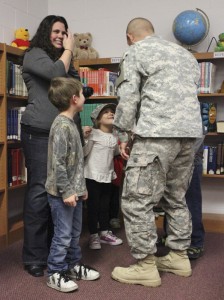 Sgt. Thomas Estes stands with wife, Tammy, in Northwood-Kensett Elementary School's library after surprising their children, Cole, Blake and Hannah. Blake is standing in front, while Hannah stands near her dad wearing his hat.

Then Costello asked all the students if they had any family members in the military, some children raised their hands, including the Estes children. He then asked Cole, Blake and Hannah what they would ask for if he could grant them any Christmas wish, and they said they’d like their dad to be here. That’s when Thomas came out of the other room. Hannah ran to him immediately and he picked her up while the boys came to his side.

“It was hard to keep it a secret from them,” Tammy said.

She said her children were shocked but could tell they were excited to see him. Cole said through tears that having his dad home was better than Christmas. Tammy and Thomas planned that on the two weeks he’s home he will spend one full day with each child doing whatever they want.

“They get to spend one whole day with Daddy,” Tammy said.

Cole, who said he’s proud of his dad, already has his activity planned.

“I just want to play football with him,” Cole said.

This is Thomas’ fourth deployment, and Tammy said it’s been the hardest on the kids because they’re older than they were for previous ones. As much as possible the kids try to talk with him over video chat, but when he’s on missions it’s not possible. Tammy said they also write him letters and draw him pictures. 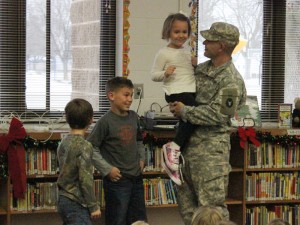 Thomas landed back in Minnesota Sunday, and he and Tammy visited some of his family members before spending some time together. They hope to spend as much time together as a family as they can before he leaves shortly after Christmas.

Thomas is deployed to Kuwait with Albert Lea’s Delta Company, part of the 2nd Battalion, 135th Infantry Regiment, within the 34th “Red Bull” Division. Tammy is the leader of the local Family Readiness Group, an organization of family members, volunteers and soldiers belonging to a unit that provides mutual support and assistance, and a network of communications among the family members, the chain of command and community.