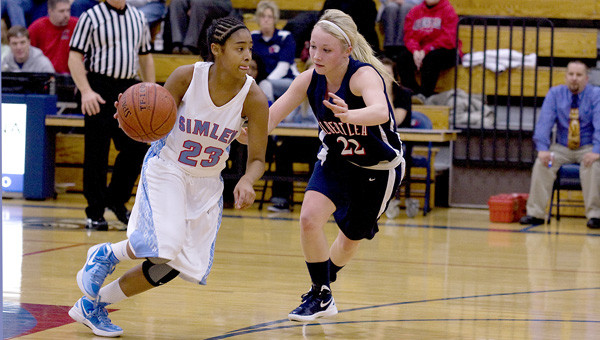 The Albert Lea Girls’ basketball team fell 56-26 to the Simley Spartans on Friday in their home opener.

Simley started the game off with a 16-3 lead and only let Albert Lea score 11 more points before the half to take a 35-14 lead into the break.

The Tigers made just six of 49 field goal attempts, a 12 percent success rate, while Simley shot 49 percent from the field.

Coach Sean Gillam and his team said they know they need work when it comes to their offense and making the shots.

“We need to move that ball around, find the correct shots, know when we should challenge a bigger player or when we should back down and just take our time,” said Gillam. “I think if we could get offensive patience down, it would help our press so much because then we could take out of the defense, a lot of energy that they have to use, to follow us around offensively.”

For the game, senior Ashley Tewes came out 2 for 6 in field goal attempts, Bryn Woodside 2 for 8 and Brittani Zuniga, 2 for 10. Simley’s Kylie Brown, shot 7 for 8 and Lexy Saraswate, shot 5 for 6.

“We played Simley last year, we knew it was a big gap between points but we weren’t coming out [tonight] expecting to lose. We had a good mindset in the locker room. We were really pumped,” said sophomore Bryn Woodside. “But, we’re a team that hasn’t played a lot together and it’s just the first few games of the season so from here on out, we can only go up.”

Starting the second half, Simley felt no pressure from Albert Lea as they scored eight times from the field. With the help of Nya Chan’s five free throws, Albert Lea was able to put a few more points on the board, but it wasn’t enough to bring the Tigers back into the game. The Spartans outscored the Tigers 21-12.

The Tigers play Northfield at 7:30 p.m. on Tuesday at Albert Lea High School.