State Line Lake may be restored 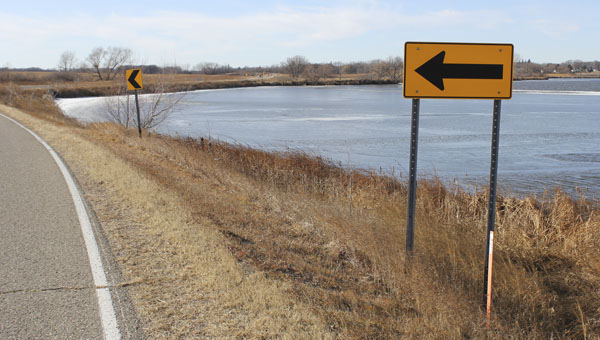 State Line Road curves a little south into Iowa to get around State Line Lake about a half mile east of Emmons. Community members have brought their desire to have the lake restored before the attention of conservation officials. -- Tim Engstrom/Albert Lea Tribune

EMMONS — Conservation officials have restored Geneva Lake and Pickerel Lake in the past half decade, and the next lake they have their eye on is State Line Lake.

Emmons rests on this lake’s western shore, with Gateway Park as the city’s recreation jewel. The Emmons community group called State Line Lake Restoration Inc. has led efforts to bring attention to the lake’s sorry shape and want do something about it. 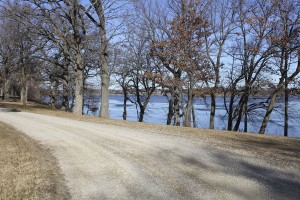 State Lake Lake and old oaks are the stars of Gateway Park in Emmons. Some Emmons residents say cleaning up the lake will bring more people to the underused park.

State Line Lake Restoration Inc. has 120 members with nine board members. One of them is Emmons City Council member Loren Honsey.

“It’s a great big mud puddle right now,” he said. “The fish are carp and bullheads. We want to get northerns, perch, crappies.”

Jeanine Vorland is the area wildlife manager for the Minnesota Department of Natural Resources. She said the 425-acre lake is dominated by green algae all summer, with rough fish and poor water quality.

“Ecologically, it doesn’t have to be that way,” she said. “We’d like to see it support a much more diverse game fish and pen fish community.”

The dam — at the unnamed creek that begins at the lake’s southeast shore and drains 2 1/4 miles later into Lime Creek — is dilapidated and leaking, she said. Replacing it with a new variable-crest dam would help restore the lake. The rough fish could be killed with a drawdown of the water one winter.

Freeborn County owns the dam. The next step, Vorland said, is setting a community meeting to gauge local support.

The national nonprofit organization last winter surveyed the dam and the outlet area, in addition to taking depth measurements around the lake.

DNR records indicate the lake has an average depth of 3 1/2 feet and is almost 6 feet deep in places. However, that has changed over the years. Ducks Unlimited hopes to have a phase one plan — with updated figures — out this winter, with most likely a recommendation for a variable-crest dam and a downstream fish barrier.

Geneva Lake is designated a “wildlife lake,” which means the state manages the waters without needing to get local permission. That includes winter fish kills.

Landowners along State Line Lake need to decide whether to make it a wildlife lake, too, or grant permission for a one-time winter drawdown — or other options, including doing nothing.

He said the organization also would like to see the DNR build a boat landing at Gateway Park. There is one there, but Honsey it is washed out and probably would get a truck stuck after backing a boat trailer down there. A new one would be blacktopped and be wheelchair-accessible.

State Line Lake Restoration Inc. paid for a survey of the boat landing to assist the DNR in getting the work done. It also has held fundraisers to pay for a community contribution toward building a boat landing.

“Our goal is to not use local taxes for fixing the lake,” he said. “I would love to have State Line Lake turn out like Pickerel Lake.”