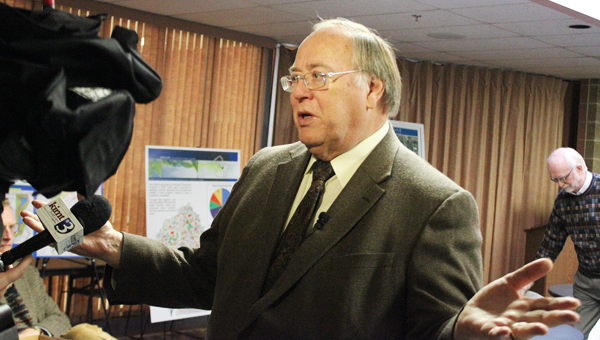 Two of Albert Lea’s proposed multi-million dollar projects went under the microscope Thursday during a visit from the Senate bonding committee. 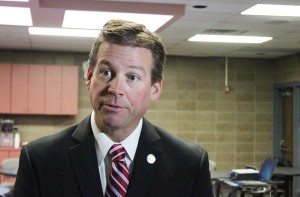 During a tour around southern Minnesota, members of the Senate Capital Investment Committee stopped at Riverland Community College to hear plans for the proposed $7.5 million bonding request to dredge Fountain Lake and the $3 million Riverland request that involves demolition, renovation and reconfiguration of space at the school.

“Ultimately we have to make some judgments,” said committee Chairman Sen. Dave Senjem about all of the requests.

Senjem said the senators would be considering projects that improve economic vitality or help education. There are more than $2 billion in requests submitted, but only about $400 million will be given out.

Judy Enright, Riverland facilities manager, said Riverland’s request involves “right-sizing” the campus and making sure they are using the space most efficiently.

Specifically, there are plans to renovate about 21,000 square feet of existing instructional and student service space, to demolish about 7,700 square feet of obsolete and underused classroom space and to reconfigure one large classroom into two multi-use spaces. 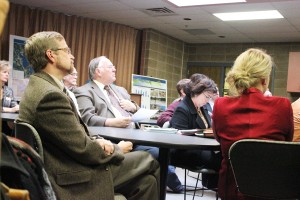 There are also plans to replace a portion of the HVAC system and improve energy efficiency. The HVAC system on the west side of the campus has already been completed.

He said the Watershed District and the city of Albert Lea are partnering to ask for $7.5 million to go toward cleaning up the lake. The money will go toward removing 1 million cubic yards of sediment and will ultimately aim to increase the depth of the lake, reduce internal loading, improve water quality and increase recreational opportunities.

Henschel noted there is as much as five feet of sediment accumulation in the northern part of the lake and that sediment and phosphorous reduce water clarity and reduce people’s desire to use the lake.

He talked about the economic boom that cities such as Clear Lake, Iowa, have seen since similar dredging projects of their own.

Henschel said with Albert Lea as a gateway city to Minnesota, he thinks the dredging would have a huge economic impact on Freeborn County and Albert Lea as well.

Half of the project would be completed thanks to a half-cent sales tax.

Sparks said he thought both projects were well received and noted that it was significant to have the committee come to town to hear about the projects in person.

The visit came about two months after the House Capital Investment Committee came to town on a similar tour to find out about bonding requests.

The committees tour the state every two years to hear requests; traditionally, most bonding allocations are made during the even year of a legislative biennium.