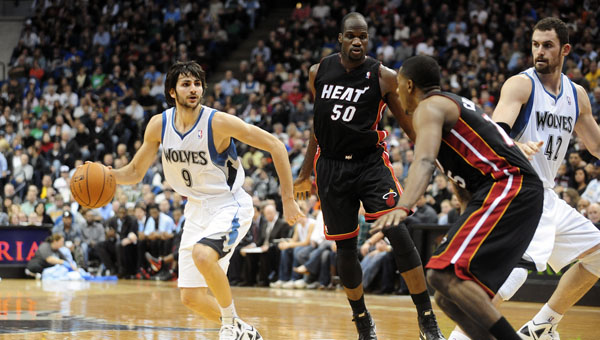 Minnesota's Ricky Rubio (9) dribbles off a screen set by Kevin Love (42) during the first half of a 103-101 loss to the Miami Heat at the Target Center. -- Andrew Dyrdal/Albert Lea Tribune

MINNEAPOLIS — LeBron James has always put up big numbers when he comes to Target Center to play the Minnesota Timberwolves. And he rarely has to break a sweat — or play in the fourth quarter — to do it.

Now that Ricky Rubio is running the point and Rick Adelman is calling the shots for the Timberwolves, James and the rest of the NBA are going to have to work for everything they get when they come to town. 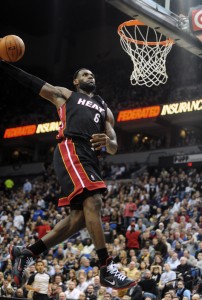 Miami’s LeBron James goes up for a dunk on Friday during the third quarter of a 103-101 win over the Timberwolves at the Target Center in Minneapolis. James had 34 points, 10 assists and eight rebounds on his birthday. -- Andrew Dyrdal

Dwyane Wade hit a jumper from the wing, then scored on an inbounds pass from James with 4.6 seconds to play to lift the undefeated Heat to a 103-101 victory over the Wolves on Friday night.

Playing on a sore foot, Wade finished with 19 points, while James had 34 points, 10 assists and eight rebounds on his 27th birthday.

“I’m glad we played them early because later they’re going to be trouble,” Wade said. “So I think Timberwolves fans will have something to cheer about for a while here.”

But Wade hit a jumper and then lost Rubio on an inbounds play to make the winning bucket, one game after beating the Charlotte Bobcats with a last-second shot. Wade said he suggested the play after the Celtics used it to beat the Heat in a playoff game in 2010.

“We stole it,” James said. “And D-Wade, that’s two game-winners back to back, right? Good for him. I like it.”

It was a crushing defeat for the upstart Wolves, who had the mighty Heat on the ropes all fourth quarter thanks to Rubio’s brilliance. The Spanish rookie fed open teammates for easy buckets and hit a 3-pointer with 2:28 to play that gave them a 98-94 lead. 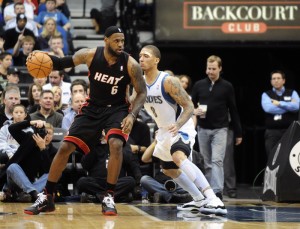 in the final minute to give Wade a chance to steal it.

“We did a lot of good things tonight,” said Adelman, whose Wolves have lost their first three games of the season by a combined nine points. “It’s just sooner or later you have to keep through it and give yourself a win at the end. If they stay with, they’ll do that.”

Anthony Randolph had 14 points and Wayne Ellington added 11 off the bench for Minnesota.

Chris Bosh had 20 points and nine rebounds, and Norris Cole scored 12 for the Heat.

It was a thrilling back-and-forth between a star-studded team that counts a loss in the NBA finals as a failure and the young up-and-comers who have lost 18 straight games dating back to last season. 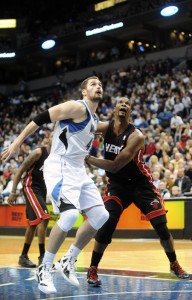 The Timberwolves’ Kevin Love, left, battles for rebounding position on Friday against the Heat’s Chris Bosh during the first half of a 103-101 loss at the Target Center. -- Andrew Dyrdal

Playing without veteran guard J.J. Barea, who tormented the Heat in the finals with Dallas, because of a strained right hamstring, the Wolves ripped off an 11-0 run in the final period for an 88-83 lead with 7:20 to play.

Bosh kept the Heat in it with some sharp shooting, hitting jumper after jumper just over Love’s out-stretched hand.

James turned 27 on Friday, and he said earlier in the day he always plays with a little extra juice on his birthday and the numbers support that. He entered the game averaging 35.3 points, 7.8 rebounds and 5.0 assists in four previous birthday games.

True to form, he scored 15 points in the first quarter, and the Heat flustered the young Wolves into six turnovers and 39 percent shooting. Cole then scored six of the Heat’s first eight points in the second quarter for a 39-26 lead, and it looked like Miami was pulling away.

But Rubio, Randolph and Ellington spearheaded a 14-0 run to put the Wolves back in front. Criticized for his shooting before coming to the NBA, Rubio hit an open jumper and added a three-point play for a 49-45 lead. Then he threw an alley-oop pass high over the rim that Randolph threw down, sending the packed Target Center crowd into a frenzy.

“We want to win and we are young and we have to learn from these experiences,” Rubio said. 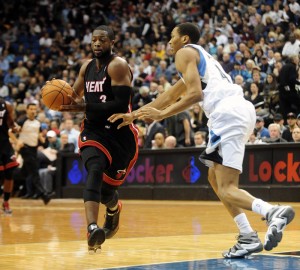 James turned the third quarter into a one-man dunk contest, soaring through the air for three straight that put the Heat back in control. He threw down a windmill, a baseline lob from Cole and a final one-handed hammer for a 78-72 lead.

Rubio also had a costly turnover with 1:36 to play and Ellington missed a forced jumper at the buzzer for another loss. But for the first time in a long time, the Wolves see better days right around the corner.

“They’re going to be a really good team,” James said. “If it’s not this year, soon.”