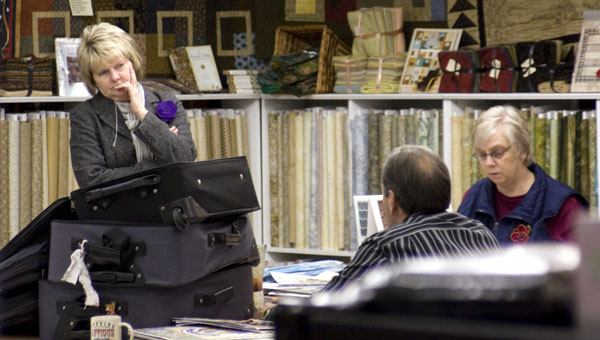 HAYWARD — Looks can be deceiving when it comes to the Calico Hutch Quilt Shop. Small from the outside, the inside is made up of six rooms packed with fabric, sewing machines and quilt kits.

Already sewn quilts hang like wallpaper throughout the store. Every color imaginable can be found on one of the 4,000 bolts of fabric that fill the rooms. 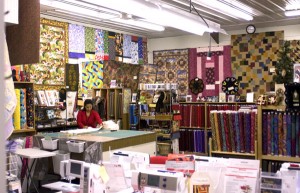 Kristy Minear, an employee at the Calico Hutch, measures out fabric. The Calico Hutch will celebrate its 30th anniversary next year.

For some women, sewing is an activity that relaxes them or offers an escape from every day life.

“You don’t really have to concentrate too much,” said shop owner Carolyn Matson. “But you have to think about what you’re doing. Enough so that it takes away all the messing around and it puts your mind at ease.”

Matson told the story of a woman who had a stressful job dealing with high-risk patients, then visited the Calico Hutch. She had to buy a sewing machine because it was the only thing she could do at the end of the day to avoid reliving or thinking about what had gone on in the course of her shift.

There’s been times when the shop has had visitors that stop in just to touch and feel the fabric when they’re having a bad day.

“It’s unlike other habits: smoking, pull tabs, fishing, whatever,” said employee Diane Ladlie. “You always have a finished project when you’re done quilting. You don’t from a lot of hobbies that people have; it’s not a waste of money.”

It isn’t just a mental escape quilters experience. There are bus trips for them, too, that travel throughout Minnesota, Wisconsin, Iowa and Illinois stopping at different quilt shops for snacks, shopping and a chance to learn from each other.

Besides the bus trips, there are classes and clubs that meet throughout the week where anyone from beginner to the experienced can come in and learn new things from instructors. And three times a year, quilters have an opportunity to join more than 100 women at a retreat and play games, take classes and show off their work.

Last week at the Calico Hutch, a group of women came in for a birthday party and from 9 a.m. to 9 p.m. they busied themselves with quilting projects.

Matson said quilting is a giving thing. She estimates 90 percent of the product that goes out her door is turned into a gift for a family member, friend, an auction donation or a wedding present. Less than 10 percent is actually kept by the quilter.

While quilting is mostly a women’s world, there are a few men that make appearances in the Calico Hutch. One in particular is Rick Rassmussen, a manufacturer’s representative who sells Matson a portion of her fabric supply.

Rassmussen said he can count on his two hands the number of men he knows of in the business. He’s OK being outnumbered though.

“It’s great,” he joked. “I had my pre-game warm up with having seven sisters, so I can deal with them no problem.”

Deciding what to buy is a process that Matson doesn’t really care for, so Ladlie helps out.

The two spend a lot of time discussing what sorts of prints or solids they would like to add to their collection or figuring out what customers would be interested in purchasing.

“I’ll say, ‘That’s the ugliest thing I’ve ever seen,’” said Matson. “Diane will say, ‘You know what? It’s gorgeous and it’s going to sell.’ So we buy it and it does sell.”

Ladlie feels like others, she has to sew just about every day to feel relaxed. Piecing together the quilt is her favorite part, almost like a puzzle without a picture to guide her.

“It’s like painting with numbers only you put two pieces together, then it’s four, then it’s six, then it’s more,” Matson said. “It gets bigger and bigger and pretty soon you’re done. Then you look at it and you go, ‘Wow, that’s really cool’ or ‘Gee, that’s the last time I’m going to do something like that.’”