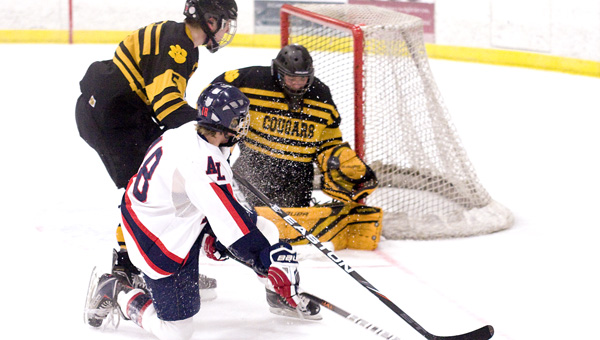 During the second period of the game against Mankato East on Tuesday, Albert Lea had three players score the first goals of their career. Cody Haaland scored his at 29 seconds into the second period, Lewis Kelly at 9:00 and Matt Cheever at 15:50.

Those three were part of an eight-goal second as the Tigers cruised past the Cougars 9-0 at Roy Nystrom Arena.

With a few of the stronger players sitting out due to injury, Albert Lea coach Roy Nystrom had to rearrange his game plan.

He had four sophomores playing on the blue line. Lucas Peterson, a forward, has been playing there most of the season but for those who haven’t, they had to step up their game.

Reed Willet had the chance to play his first varsity game, and Van Zelenak played defense instead of forward like he’s used to.

“When we get injuries, my philosophy is OK, now somebody else is going to get a chance to play, let’s see what you can do,” said Nystrom. “It’s basically what the kid has got inside of him. Is he going to perform or is he going to choke up.”

Nystrom believes with the boys he has, none of them will choke and all will put forth an effort. He keeps in mind they will make mistakes because they haven’t been put into the situations they are facing.

The Tigers had a slow start in the first period with Larry Olson scoring the only goal at 16:33. The Tigers had 24 shots on goal to the Cougars’ one. 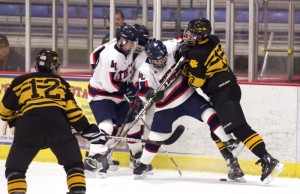 In the second period, Albert Lea came out strong offensively.

“We started to get into the slot area and we were starting to bang away,” Nystrom said. “We got some pretty good opportunities and some second and third shots and they started to fall.”

He said rebound shots are the most important ones because 95 percent of the time, the goalie is going to block the first shot.

The Tigers scored eight of their nine points during the second period and outshot Mankato East 23-2.

There were only two penalties for the entire game, one for each team.

“I can’t remember the last game that we played where we had one penalty,” Nystrom said. “I was sitting on the bench thinking, my gosh, we haven’t had a penalty all night, this might be a world record for us.”

In the third period, Albert Lea continued to keep Mankato East away from their net. The Tigers outshot the Cougars 16-3.

“The only time it was in our end is when we made a mistake and we let them out of their zone,” said Nystrom.

He is proud that more of his boys are getting points, but now his main emphasis is how he will line his team up for the game against Rochester Mayo on Thursday.

So far, the Tigers are sitting at 4-0 in the Big Nine Conference making them the only team without a loss.