Tigers fight to the finish 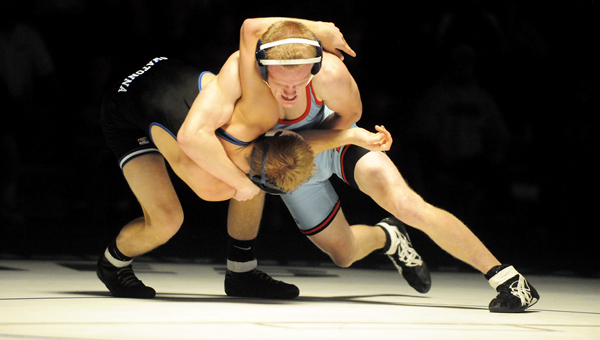 OWATONNA — It didn’t follow script, but when Albert Lea and Owatonna wrestlers meet, it rarely does.

The Tigers erased a discouragingly slow start and 10-point deficit to stun Owatonna 31-30 on Thursday night in another thrilling chapter of southern Minnesota’s greatest rivalry.

With Brody Sunblad, a senior with limited varsity experience, ready to take the mat against one of the Huskies’ top wrestlers, the hole the Tigers dug looked set to get deeper.

But Sunblad dug up something else — heart.

The senior built a 4-0 lead over Owatonna’s seventh-ranked Bowen Schultz and led 5-4 entering the final period. Despite facing heavy pressure from Schultz in the third, Sunblad got another takedown and back points to secure an unlikely 10-4 victory.

The win swung much-needed momentum in the Tigers’ favor, and the team went on to win four of the next five matches, which included three consecutive pins.

“I don’t know what even happened,” Sunblad said. “I was just going out there and trying to give up the least amount of points. I was in better shape than him and stronger than him.”

Reeling in the final minutes, Schultz attempted to take down Sunblad with a series of duck unders. But Sunblad caught on.

“He kept doing those over and over and getting nothing out of them,” said Sunblad, who’s also on the high school’s diving team. “Near the end of the period he did another one and I caught the chin and threw him. I was planning on that after his fifth one.”

Albert Lea’s sideline, which had been stagnant throughout the slow start, erupted following Sunblad’s win.

The energy was contagious.

No. 8-ranked Owatonna’s Tyler Burke won a decision over Bany Chan to extend the Huskies lead back to double digits at 20-10 before the Tigers pulled another stunning upset.

No. 6 Albert Lea’s Trey Hable then pinned Kylie Kath in 40 seconds at 170 pounds, and Dustin Samudio followed with a pin of Chad Wilker midway through the second period to give the Tigers its first lead at 25-20.

With three matches to go, Albert Lea’s Dalton Westerlund jumped up to 195 pounds to face fifth-ranked Coyte Kuefner, who dropped down from 220. The shuffle set up one of the dual’s most exciting matchups — Kuefner’s power versus Westerlund’s finesse.

In the end, Dalton had a little more of both.

Kuefner pushed Dalton out of the ring twice to open the match, but the Tigers senior scored a takedown near the team’s sideline and a pin 1:25 into the first period.

Albert Lea’s fans and sideline were so loud that Dalton didn’t even hear the referee’s hand slap the mat. He stood up to resume the match only to realize he had already won. Dalton lifted his arms into the air as his teammates flapped theirs.

“I saw that he was pinned right away but I didn’t hear the ref count the fall,” Dalton said. “I just heard everyone get up and then I kind of let up, which I shouldn’t have. But once everyone was freaking out I figured he called the fall.”

Dalton’s win gave the Tigers an 11-point advantage, a lead only a fall and technical fall could erase. Albert Lea’s Tyler Blake lost 20-8 at 220 pounds, but held Justin Flores to only a major decision, securing the dual win. Owatonna heavyweight Spencer Sorenson pinned Bryce DeBoer to make it a 31-30 final.

“It was a fun win,” Tigers coach Larry Goodnature said. “It was a little hard on the older boys’ heart like myself, though.”

Goodnature said the emotional atmosphere and a hot gym affected wrestlers’ stamina on both teams. When asked if weight cuts played a role in the exhaustion, too, Goodnature said “it probably did.”

“This gym was terribly hot with it being packed, and I think with the excitement and drama of this match and what it means, kids were getting emotionally tired before they even started,” he said.

On paper, the Tigers were expected to get off to a better start with three of its first five wrestlers ranked in the state’s top 10. But Owatonna set the tone early with a fall.

“Some of our kids didn’t wrestle as well as I thought they would or should have,” Goodnature said. “I also thought we were a little out of shape. I don’t know if it was because of all the excitement or if it was just that we need to get in better shape but we’ll have to deal with that.”

Trevor Westerlund dropped from 113 to 106 to face Owatonna’s ninth-grader, Brandon Moen. Trevor built a 6-3 lead in the first period, which was interrupted twice by his bloody nose, but led just 7-6 entering the final period and looked tired. Moen pinned Trevor in the final minute to give the Huskies a 6-0 lead.

“It was a lot closer than I thought it would be but we somehow pulled it out,” Dalton Westerlund said. “We had some key upsets. I said before that bonus points were going to be the key in this match and we got the bonus points in the upper weights.”

Goodnature commended Owatonna and coach Cliff Casteel for an impressive performance and said the matchups gave Albert Lea an advantage.

“There was a lot of jockeying around by both clubs tonight and it definitely worked in our favor,” Goodnature said. “It was a fun dual, and I’m glad we won it, but we’ll be meeting each other again some day down the road.”