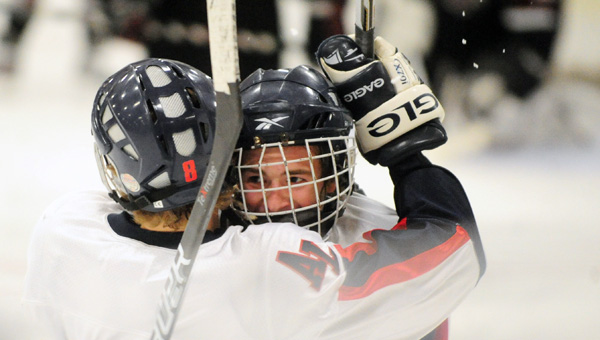 The Albert Lea boys’ hockey team shut down New Prague defensively on Tuesday en route to a 2-1 win over its section rival at Roy Nystrom Arena.

Griffin Wangen had 39 saves and the Tigers held the Trojans scoreless over the finals 2 1/2 periods despite being outshot 40-37.

“It’s just a nice section win,” Tigers coach Nystrom said. “It was a real tough game against a real good opponent and we were able to hang on at the end.”

After entering the third period tied 1-1, Hacker scored from near the blue line two minutes and 33 seconds into the frame to give the Tigers a 2-1 lead. New Prague outshot Albert Lea 19-8 in the final period, and had a number of chances after pulling its goalie for the final two minutes, but a hooking penalty on Mike Fadden gave the Tigers a power play and set the Trojans’ goaltender back onto the ice for the final 26 seconds, securing Albert Lea’s win.

“He was pressed in the third,” Nystrom said, of his senior goalie. “We were dead tired in the third. We were only running two lines basically the entire game. Our guys were pretty tired at the end of it and they took advantage, but we weathered the storm.”

The Tigers played just three defenseman because junior Darik Weigel dislocated his shoulder in practice. Nystrom said Weigel will be out six weeks.

After falling behind early, Falk scored a backhanded goal off the rebound of Cody Haaland’s shot at 15:18 in the first period. The Tigers outshot the Trojans 16-12 in the first and 13-9 in a scoreless second.

In the third, Hacker gave the Tigers the lead for good.

“It was a big shot,” Nystrom said. “Stadheim gave him the pass and he slid it right on the ice and caught the corner — nice goal. We had a lot of scoring opportunities tonight and they did, too. But both goaltenders came up big.”