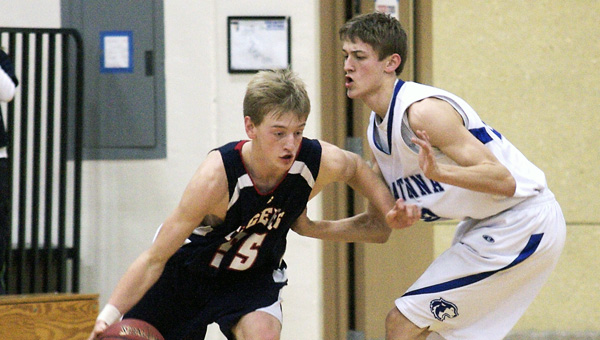 Albert Lea played well for the first 10 minutes of the basketball game against Owatonna on Friday. The scores were within four points of each other for the majority of the time. Kyle Ooms led the Tigers with nine points.

Albert Lea coach Lucas Kreuscher said his team was focused and ready to play at the start.

“Our guys want to compete against anybody,” Kreuscher said. “They’re not afraid or anything like that, but we knew our hands were full.”

That they were. Owatonna led the entire game and won 86-52.

With eight minutes left in the first half, Owatonna had a small lead, 24-17 and it progressively became larger.

Two minutes later, Ooms added four points to his total and Cody Scherff, one. The Huskies still had a nine-point lead.

With two seconds left of the first half, an Owatonna player made a 3-pointer. Albert Lea was down 44-32.

“We had guys kind of standing around observing rather than being active and participating,” said Kreuscher. “We didn’t end the half well and we didn’t start the second half well at all.”

Wichmann made the first two points of the second half, but Owatonna answered with yet another 3-pointer.

With 16 minutes left, Owatonna went on a 10-point run before Wichmann scored again for the Tigers.

Albert Lea trailed by 26 with 11 minutes on the clock. 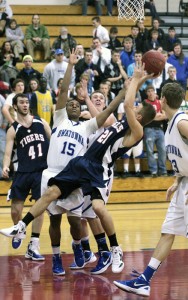 Tyler Wichmann tries to position himself so he can get the ball into the hoop. Wichmann scored nine points for the Tigers during their game against Owatonna on Friday. Brandi Hagen/Albert Lea Tribune

For the next two minutes, Owatonna went on another 10-point run until Scherff scored and put a stop to it.

Kreuscher said there was a lot of pressure on the Tigers to make decisions without really thinking.

“That’s what Owatonna does such a good job at.” he said. “They just make you speed up whatever decision you’re making, whether it be to shoot or pass. They just make you rush everything and we’ve got to find a way to slow things down in our minds.”

It wasn’t enough to keep up with Owatonna’s scorers, though. What became an uphill battle at the start of the second half, ended in a 34-point loss for the Tigers.

“Owatonna’s always a very good ball club, but you know they’re tough when they keep sending so many guys in and very deep,” said Kreuscher. “We’ve talked about that. We’ve got to get deeper or get better conditioned.”

Albert Lea had 25 turnovers. They had five scorers while Owatonna had 10.

Scorers for the entire game were Ooms 21, Scherff 13, Wichmann nine, Vandenheuvel eight and Evan Templeman one.

Even though their last two games have been a struggle, Kreuscher continues to keep his head up because Friday was the third contest of a 25-game schedule.

According to Kreuscher, Monday’s practice will be intense as the Tigers get ready to play against Rochester Mayo on Tuesday.

“We’ve got to hold each other accountable in practice,” Kreuscher said. “We need to finish well rather than just getting through it.”