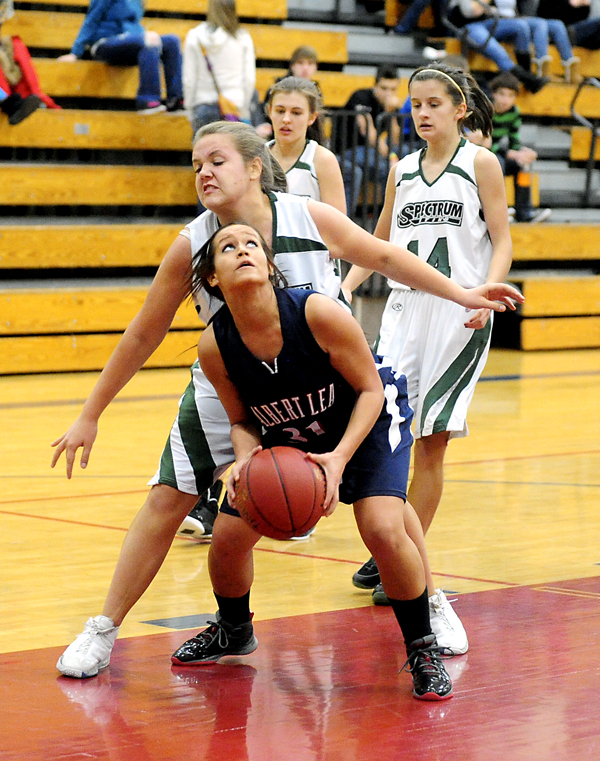 Albert Lea’s Brittani Zuniga looks for the basket on Tuesday before taking a shot at Albert Lea High School. The Tigers beat Spectrum 60-17 in the first round of the Tiger Classic. -- Brandi Hagen

The Albert Lea girls’ basketball team won its first game of the season and snapped a 10-game losing streak dating back to last season on Tuesday with a 60-17 win over Spectrum in the opening round of the Tiger Classic at Albert Lea High School.

Sydney Rehnelt recorded a double-double with 13 points and 10 rebounds for the Tigers, who play again at 5:30 p.m. today against Austin in the finals.

“We played tough tonight,” said Albert Lea’s assistant coach Cassie Gorman, who filled in for head coach Sean Gillam who was out with an illness. “It was time for a good, hard game.” 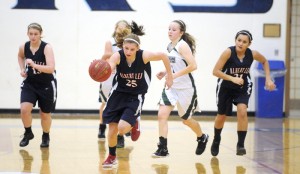 The Tigers (1-9) jumped out to a 10-4 lead in the first 2 1/2 minutes after six quick points from Bryn Woodside. Rehnelt made one of her two 3-pointers and a free throw, and Lindsey Stewart scored a layup off an offensive rebound to extend Albert Lea’s lead to 20-4.

The Sting score five unanswered points to pull within 11 but the Tigers answered with a 11-3 run to end the half ahead 31-12.

Hungry for its first win of the season, the Tigers didn’t relent after the break. Albert Lea outscored Spectrum 29-5 in the second half.

“There’s been a couple games this season where we’ve been up and then we’ll lose that lead,” Gorman said. “So that’s one of the things we focused on at halftime — keeping the pedal down, working hard and keeping the intensity up.”

Nya Chan scored six of the Tigers’ first eight points out of the break, and Dominique Villarreal made a layup to cap a 22-2 run and give Albert Lea a 53-16 lead with 9:10 remaining.

Neither team scored over the next three minutes and scoring slowed down for the remainder of the game as the Tigers finally reached the win column with a 43-point blowout.

Gorman said the Tigers responded well under unusual circumstances — an early start time and small crowd over district’s winter break — but have tried to keep the week as routine as possible.

“They came out and played hard and that’s exactly what we expected of them,” she said.

The Tigers game against Austin will be the second matchup between the Big Nine Conference rivals. Austin beat Albert Lea 57-51 on Dec. 13 at Albert Lea High School.