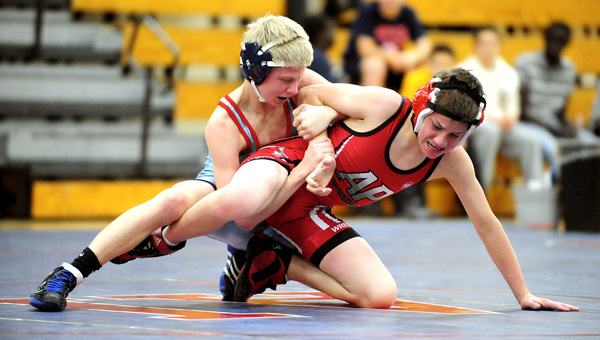 Albert Lea’s Beau Johnsrud will likely wrestle at 106 pounds on Thursday as the Tigers wrestle at rival Owatonna. The match is slated to start at 7 p.m. -- Brandi Hagen/Albert Lea Tribune

I have admitted many times before that my knowledge of the sport of wrestling before I moved to Albert Lea was very little.

I attended maybe a couple of matches when I was in high school to support a good friend, and was one of many students who took a fan bus up to the state tournament one year to watch that same friend. In college, I lived with three wrestlers during my sophomore year, and learned more of the basics of wrestling by watching them grapple all over the apartment. (I think we had a few pieces of furniture that didn’t make it through the year).

I have lived in western Kansas, eastern Wisconsin, Austin and Mankato, but have never seen the passion for wrestling as great as it is here in Albert Lea.

I remember being asked by someone when I moved to town, “Have you ever done wrestling before?” I think I responded, “On the Air? They do that here?” I was happy to hear that there was someone else that had done the actual play-by-play in the past, and a thanks to Jon Hansen, and now Brian Paul, for the excellent work they do on the air and for teaching me so much about the sport.

Maybe one of the greatest rivalries in any sport in the state takes place in Owatonna on Thursday as sixth-ranked Albert Lea faces the eighth-ranked Huskies. I know I am saying something that all Tigers wrestling fans know, but it doesn’t get much better than this when these schools meet. If you don’t get there well before start time, be prepared to walk five or more blocks to get to Owatonna High School’s gym. Owatonna puts on a good show, with a spotlight over the mat, a projection screen and black lights that the Huskies wrestlers walk by when they enter the gym. Some may say it’s too much, and I wouldn’t disagree, but its extra entertainment for the fans, and I think adds extra motivation to the visiting team to go in there and win.

I talked to coach Larry Goodnature on Saturday, and he expressed how impressed he was with his kids so far this season. They’re off to a 7-0 start and they have beaten three top 12-ranked teams in Anoka, Centennial and Coon Rapids. Goodnature said the kids are just working hard, having a lot of fun and continuing the Tigers’ never-give-up attitude.

So once again the stage is set for these two longtime wrestling powerhouses. The hype for the matchup may be different this year with it being so early in the season, and you can’t say whoever wins Thursday will be the conference champs. (Even though the two schools have won the past 16 titles. Owatonna has won nine and Albert Lea seven, including five of the last six). And with Hastings entering the section, some say they are now the new favorite to reach the state meet. We will find out in February, but as of right now, this is still the Tigers and Huskies section, and round one of possibly two takes place Thursday.

KATE Sports Director Aaron Worm’s column appears each Monday in the Tribune. He can be heard from 6 to 11 a.m. weekdays on The Breeze.