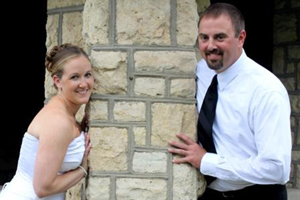 Parents of the bride are Frank and Faye Learn, of Hayward. Grandmother of the bride is Eleanor Johnson, of Austin.

Parents of the groom is Donna Ebeling, of Windom.

Best man was Darmey Hage, friend of the groom, of Sioux Falls, S.D.

Ring bearer was Braden Ebeling, of Bloomington, nephew of the groom, son of Mark and Angie Ebeling.

Christina graduated from Albert Lea High School and attended University of Minnesota. She is employed at Beresford High School.

Paul is a graduate of Windom High School and attended Southwest Minnesota State College. He is employed at DirectTV.