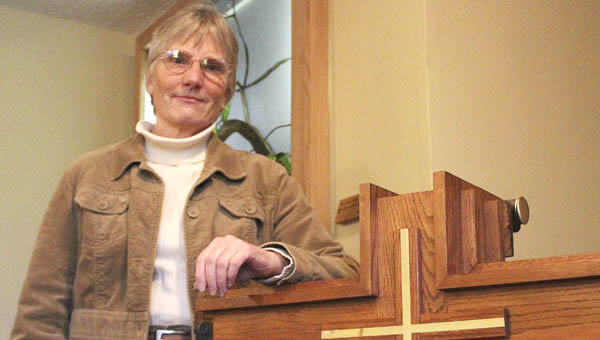 Nancy Overgaard, new chaplain at Thorne Crest Retirement Community, poses for a photo in the chapel. Overgaard is originally from Albert Lea and recently moved back into the area. -- Kelli Lageson/Albert Lea Tribune

After years of studying at various places in the United States and years of pastoral work in New York and Croatia, an Albert Lea woman has come home to continue her work.

Marketing Director Karen Anderson said they’ve never had a chaplain before, but because wellness is a priority they are concerned about spiritual well-being.

Overgaard is ordained as a Presbyterian minister but said she’s looking forward to the challenge of serving people of all faiths at Thorne Crest.

“The residents are so very gracious and welcoming,” Overgaard said. “I’m looking forward to using all my training.”

Overgaard started in October and said being a chaplain will be vastly different from her four-year experience in Croatia. She was a faculty member at a seminary there and traveled to Bosnia, Serbia and Macedonia.

“We got to do outreach in Gypsy villages,” Overgaard said.

Her time in Croatia was about 10 years after the country was affected by war. She said she met a lot of people who were still deeply affected by the war.

“It helped develop my pastoral skills,” Overgaard said. “Just hearing about the difficulties of refugees and working with them and their issues.”

She has a master’s degree in theology and doctorate of ministry from Gordon-Conwell Theological Seminary, and before her time in Croatia she was a pastor at a small church in rural New York state for six years. She enjoyed the area she worked in and said many of the skills she learned will benefit her at Thorne Crest. She’ll work around 15 to 20 hours a week coordinating other clergy members in the area to come provide communion and other services. She will preach and continue to plan events.

“My first priority was to try to call as many people as possible,” Overgaard said. “I’d love to over time increase special music events.”

She’ll work with staff for other events such as the wellness fairs at Thorne Crest aimed at the whole community. The next fair is from 1:30 to 4 p.m. Wednesday, and Overgaard will have a booth where she’ll talk to people about grief and how to deal with it during the holiday season.

“Part of my job is to identify and provide resources,” Overgaard said.

Shanna Eckberg, administrator at Thorne Crest, said the staff are getting to know Overgaard and said her caring personality and spiritual guidance are appreciated.

“We are very fortunate to have her here as our chaplain,” Eckberg said.

Overgaard is originally from Albert Lea and used to attend First Lutheran Church. She graduated Albert Lea High School in 1975. She said she’s glad to be back to the area.

Age: 55
Address: 1728 Bay Oaks Drive
Livelihood: chaplain at Thorne Crest Retirement Community
Family: parents Paul and Janet Overgaard; sisters Cheri, Jean, Marianne and Carla
Interesting fact: Overgaard’s name is on a scroll that is buried at the North Pole. She knew a man who goes dog sledding there who offered to put her name on a long list he planned to bury there.