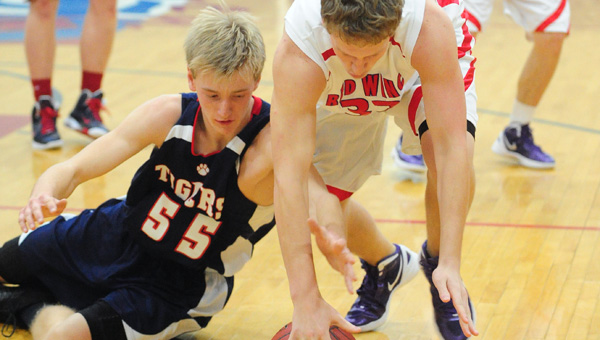 Albert Lea's Cody Scherff battles for a loose ball on Friday during the first half of an 85-80 overtime loss to Red Wing. -- Andrew Dyrdal

The Tigers came out sluggish on Friday as they spotted Red Wing a 15-point lead in the first half of the team’s season opener at Albert Lea High School.

Down 23-8 following 16 unanswered points from the Wingers, Albert Lea’s Tyler Wichmann sparked a dazzling comeback. The senior made three first-half 3s, and seven for the game, as the Tigers gained the lead in the second half and settled for overtime.

The Tigers led 80-76 in overtime following a high-flying and-1 layup by Wichmann, but the Wingers scored the game’s final nine points to stun Albert Lea 85-80.

“Unfortunately in the first half it did look like our first game,” Tigers coach Lucas Kreuscher said. “We weren’t ready for game-speed and that’s the most disappointing part.”

The Tigers had three newcomers to the starting lineup and traded points with Red Wing until Wichmann’s first 3-pointer gave them an 8-7 lead, their final until 1 1/2 minutes remained in the game.

Red Wing’s Ryan Boldt responded with an and-1 layup and sparked a 16-0 run over the next eight minutes. The Tigers called two timeouts during the Wingers’ run but cut the lead to 23-16 after back-to-back 3s from Dylan See-Rockers and Wichmann.

Wichmann made two more 3s and Evan Templeman added another as the Tigers finished the half on a 25-13 run and trailed 39-33 at the break.

“Wichmann really helped is close the gap fast,” Kreuscher said. “He had a gutty performance, cramping up, he rolled his ankle but he was making plays on defense.”

Wichmann had 13 of his game-high 31 points in the first half, and the team’s other returning starter, Kyle Ooms, had three of his 19 points, all from the free throw line.

Kreuscher said Wichmann and Ooms were pressing too much offensively in the first half but settled down in the second.

“They’re guys with high confidence, and I think they were trying to do too much, too early,” he said.

The Wingers began the second half red hot and opened on an 8-0 run to extend their lead back to 13 points.

Despite Albert Lea’s efforts, the team couldn’t pull closer than five points as the Wingers had an answer to every Tigers’ run. Ooms scored five straight points, which included an and-1 hook shot as he was pulled to the ground to bring the Tigers’ within 56-51, but Red Wing’s Joel Newman answered with five of his own.

Wichmann’s third three of the second half, and sixth of the game, sparked another run as Ooms made a baseline jumper and Cody Scherff made the first free throw of a 1-and-1 to bring Albert Lea within four points with 7 1/2 minutes remaining. Newman ended the run with two more points and the team’s traded baskets until Red Wing led 71-65 with four minutes left.

Then Ooms took over.

The senior snatched two offensive rebounds and went 4-for-5 from the free throw line as he scored seven of the Tigers’ next nine points to give Albert Lea a 74-71 lead with one minute remaining.

Red Wing’s Isaac Toivonen missed a potential game-tying three but the Wingers grabbed an offensive rebound and made the Tigers pay. Newman knocked down a 3 from the top of the key moments later and knotted the game at 74 with 18 seconds left.

After Kreuscher called a timeout, the Tigers nearly turned the ball over as it was batted toward the Wingers’ bench but recovered by See-Rockers. The near turnover wasted more than 10 seconds and the Tigers called another timeout as See-Rockers began bringing the ball back down the court. A play was set up for Wichmann to make a potential eighth and game-winning 3-pointer, but the pass from See-Rockers went off Wichmann’s hands and out of bounds to seal overtime.

The Tigers scored the first six points in overtime to take an 80-76 lead, but Red Wing surged back and scored the final nine to win 85-80.

Kruescher said the Tigers need to learn game situations better as the team missed two deep jumpshots with the lead late in overtime. After Albert Lea scored on its first three possessions in overtime, it went 0-for-3 with a turnover.

“We need to learn how to close out teams,” Kreuscher said. “But it’s hard because for the majority of the game we were trailing. I think we were in the mindset that we needed to attack a little more rather than understanding the situation.”

Kreuscher pointed to the slow start and free throw shooting as two areas that doomed the Tigers. Albert Lea shot 21-for-36 from the free throw line.

The Tigers had three players score in double figures, including Wichmann, Ooms and Templeman with 14 on three 3s.

See-Rockers had seven points and nine rebounds, Scherff had five points and three rebounds and Ooms recorded a double-double with 19 points and 14 rebounds.

“Everybody contributed,” Kruescher said. “It’s too bad we didn’t win, obviously, but we can take a lot of things from this.”