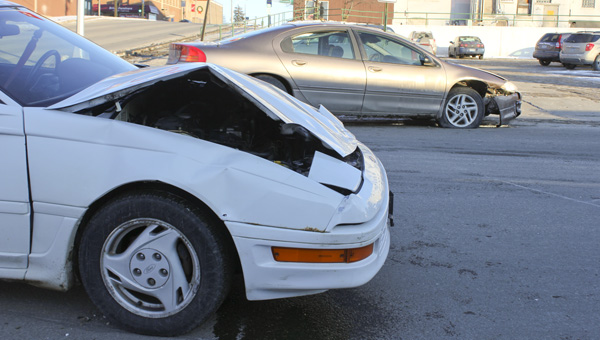 A Ford Probe and a Dodge Intrepid show their damages while temporarily parked on Washington Street on Friday after a collision. -- Tim Engstrom/Albert Lea Tribune

A woman was injured Friday afternoon when she failed to yield to an oncoming student driver on Main Street in downtown Albert Lea.

The woman was transported with minor injuries to the Mayo Clinic Health System hospital. Names were unavailable Friday afternoon as the Albert Lea Police Department still was investigating. A full report will be available at a later date.

According to police, the woman drove a mauve Dodge Intrepid and had been waiting at Washington Street to go southbound across Main. She proceeded to cross. Meanwhile, a student driver in a white Ford Probe was headed east. The instructor told him to stop, but he could not halt in time. The student reported no injury. The instructor injured his hand but was not transported by emergency responders from the crash.

Police reported that even though the student couldn’t stop in time, the woman had failed to yield in the first place, so the student was not at fault.

Traffic on Washington and Main was diverted temporarily while the crash was cleaned up and the cars were towed away.