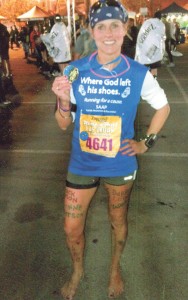 Shelley LeTendre poses with her medal after finishing a race.

LeTendre logged her second best time at a half-marathon in Las Vegas on Dec. 4, despite the fact that she was barefoot in 43 degree weather.

“It was amazing,” LeTendre said. “I was anticipating more pain than I had.”

LeTendre’s mission was to raise money and awareness for suicide prevention in Austin. She raised more than $4,500 by running the half-marathon, and she is planning to run a full marathon for the same cause in the spring.

“This just gave me a whole lot of inspiration,” she said.

Although LeTendre has finished 14 full marathons in her life, she didn’t decide to run with a specific purpose until this year when at least nine people she knew committed suicide in the span of three months. Being someone who had struggled with depression in the past, LeTendre said she was touched by the eulogy at one of her friend’s funeral. That’s when she decided she wanted to bring more awareness to preventing suicide in Austin.

While the future of LeTendre’s goal is still in the making, LeTendre continues to grow passionate for the cause. She is already collaborating with the YMCA to plan a run June 2 dedicated to preventing suicide.

Her newfound passion has also inspired LeTendre to deepen her Christian faith. During her Dec. 4 half-marathon, LeTendre prayed for family and friends who had been affected by suicide; she wrote the names of the people she prayed for on her legs.

“It’s a big testimony for me … because I couldn’t have done it without God,” she said. “I really felt like I was not alone in that race. There was no other reason I did so good except for God being with me.”

LeTendre ran the 13 miles in one hour and 46 minutes and didn’t drink a sip of water the whole time.

“I always need water, but I was feeling so great I never stopped once,” she said.

As her campaign to start a nonprofit takes off, LeTendre wants to expand her fundraising events from just runs to bake sales and other activities. She said she’s going where God leads her, and she feels like she’s on the right path.

“There’s always something better than killing yourself,” she said. “As far as having a purpose in my running, I think I’m headed in the right direction.”