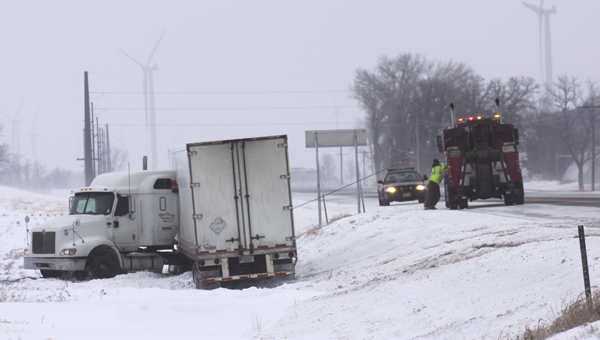 A big rig belonging to Vierkandt Express Inc. of Alden, Iowa, jackknifed Monday on Minnesota Highway 13 on the north edge of Manchester. Workers with Allen's Tow-N-Travel hook him up to cables to straighten out the tractor and trailer and, hopefully, get it out of the ditch. --Tim Engstrom/Albert Lea Tribune

Road conditions were treacherous Monday, with icy surfaces and a strong west wind.
As a result, three semitrailers jackknifed in the Albert Lea area.

One happened around 3:45 p.m. on the north edge of Manchester on Minnesota Highway 13. The other happened on southbound Interstate 35 between Albert Lea and Clarks Grove at an unspecified time. Southbound traffic was slowed because of it, MnDOT reports. Other traffic problems were emerging in the stretch of freeway as temperatures fell between 4 and 5 p.m.

Both were still being pulled out of ditches at 4:30 p.m., according to the Minnesota Department of Transportation. 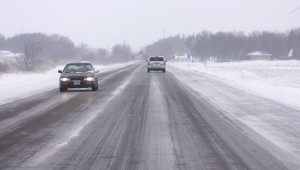 Road conditions in Freeborn County, especially outside of municipalities, were icy Monday afternoon with strong western winds. This was the scene south of Manchester. -- Tim Engstrom/Albert Lea Tribune

A third semitrailer jackknifed at 6 p.m. on northbound I-35 a mile north of the cloverleaf interchange with I-90.

MnDOT said highways on Monday afternoon are difficult to travel on. Minnesota Highway 13 near Manchester was pretty much a slab of ice.

The automated weather system at the Albert Lea airport says west and northwest winds Monday afternoon were 13 to 16 mph with gusts up to 24 mph. The high temperature for Monday was 25 degrees.

According to the Freeborn County sheriff’s reports, Jacob Wagner, 25, drove into a drainage ditch at Freeborn County Road 30 and gravel 190th Street at about 5 p.m. Monday, about 4 1/2 miles north of Myrtle.

Those figures do not count crashes handled by the Minnesota State Patrol. It handled all the freeway incidents, plus ones on state routes.

MnDOT reports that driving conditions on highways this morning were fair but with icy patches.