Child’s tragic death tops the year in news for area

But that doesn’t mean it didn’t have news. Here are the top 10 stories of 2011 for the Albert Lea area as voted upon by the Albert Lea Tribune’s news staff. 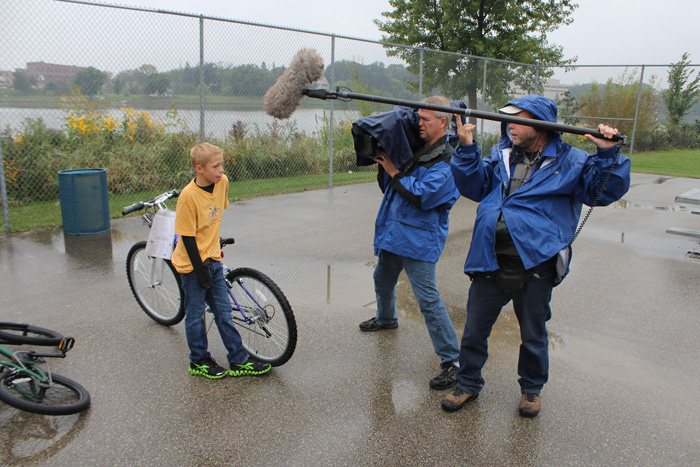 Ten-year-old Culley Larson tells a film crew with "Inside Edition" about how his bike was stolen and why he wrote a letter to the editor about it. -- Tim Engstrom/Albert Lea Tribune

It all started with a letter to the editor about his BMX bike being stolen, a poignant letter asking people to return not merely his bike but any stolen bike. He ended it with, “I love my God, I love my family, I love my bike.”

Through an aggregator, the letter made its way to Piper Weiss, a blog writer for Shine, a Yahoo website geared for women.

She interviewed Culley and his mom, Vicki, and interviewed Tribune Editor Tim Engstrom. She posted two blog entries that sparked national interest. Before long, Culley was mentioned on websites across the Internet, on local TV stations and appeared on “Good Morning America.”

Letters to the editor, phone calls and email messages came to the Tribune and to the Larsons from across America from people wanting to buy the kid a new bike.

One, for instance, was from a man in Coronado, Calif.: “My son has far outgrown his BMX bike, and I would be happy to ship it to Minnesota. Please let me know who to contact to make this happen.”

Instead, the Larsons wanted to buy 10 bikes for 10 kids. They also met with Donald Trump, who flew them to New York to appear on “Fox & Friends.” Trump wouldn’t take no for an answer and bought the 10-year-old a new bike, a Haro Top Am BMX

The Larsons with help from many friends held an event at the Albert Lea Skate Park on Sept. 18 called 10 Bikes for 10 Kids. They had raised enough money and received donations to give away bikes to kids who had their bikes taken from them.

In the end, nine bikes were given away to children who had their bikes stolen, and a raffle determined the recipient of the 10th bike, which had been intended for a kid who had his bike stolen but the bike was found.

Vicki and Culley Larson and Nicole Mayer led the event. Vicki worked with the Albert Lea Police Department to find children who had bikes stolen between June and August. Many of the kids who came didn’t know beforehand that they would be getting a new bike.