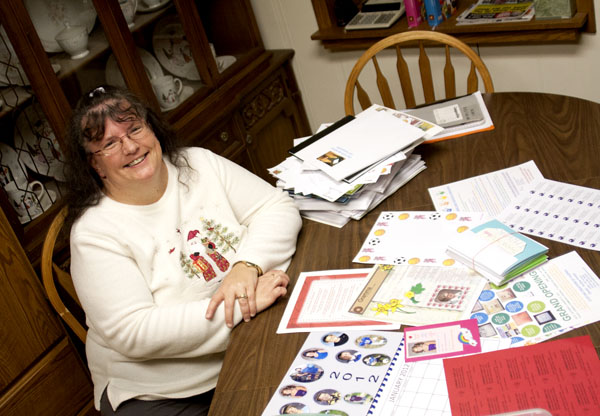 Audrea Horejsi of Geneva, sits at her kitchen table with examples of products she will offer as she kicks off her business, Custom Creations by Audrea. There will be an open house Jan. 21 at the Geneva community center from noon until 5 p.m. -- Brandi Hagen/Albert Lea Tribune

GENEVA — A grand opening for Custom Creations by Audrea, will be held at the Geneva Community Center on Jan 21 between noon and 5 p.m.

Last fall, Audrea Horejsi quit her full-time job just nine days shy of what would have marked her 11-year anniversary.

She decided instead, she would make her hobby of scrapbooking and making projects on the computer her job.

“I’ve worked in an office pretty much since I was 18 years old,” Horejsi said. “I just needed to get out and do something different.”

Knowing she would probably have to deal with a tight budget for a couple years, she decided the pros outweighed the cons.

It has also allowed her to express her creative side by being able to catch up on her own scrapbooking and projects that otherwise laid around unfinished.

“Working a full-time job, I just never had the time to do it,” Horejsi said. “I know there are other people out there that are in the same boat.”

Horejsi hopes she can help others out by putting together scrapbooks or projects they always intended to do but never did because of time or lack of creativity.

She used her mom as an example.

“She doesn’t have the patience because it’s too piddly,” Horejsi said. “She doesn’t want to do it, she’ll pay someone else to do it.

She has kept a journal for both of her girls since the day they were born, which she hopes someday they will take over.

Horejsi, who used to be a Girl Scout leader, said the children really enjoyed doing craft projects and she wanted to be able to share that excitement with others.

A friend suggested she teach classes through community education. Unsure, Horesji made some phone calls and to her pleasant surprise, they loved the idea.

She teaches art classes after school at New Richland-Hartland-Ellendale-Geneva Elementary School in Ellendale on Tuesdays and in the library at United South Central’s elementary school on Thursdays.

Most if not all the projects Horesji makes and the ones her girls make or bring home from school are displayed somewhere in the Horesji home.

“There’s nothing I would rather decorate my house with,” Horesji said. “My husband always jokes he’s going to have to add an addition onto the house just to keep all my keepsakes, photo albums and scrapbooks. I’ve always been like that as far back as I remember.”

In her business, Horesji offers just about every paper product a person could imagine wanting.

She said as time allows, she will teach herself how to do other things too, like making websites, photo puzzles and mounting of photos.