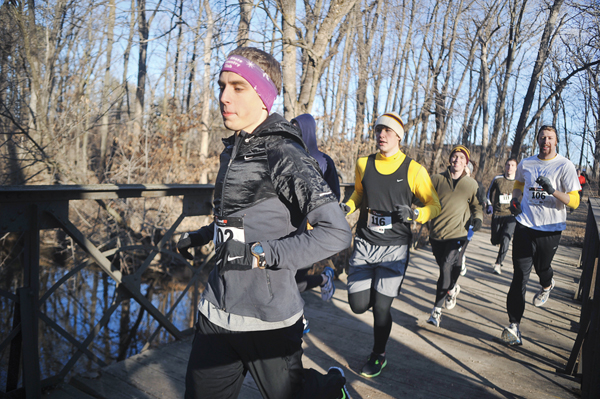 Kyle Dammen runs during the Kevin and Kyle Dammen Ski Race Saturday morning, which due to lack of snow was turned into run. Kyle's twin brother passed away just about seven months ago and before that the brothers began and organized the annual cross-country race. 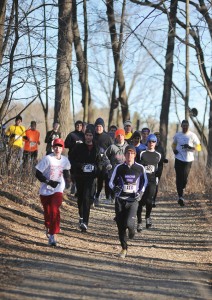 Runners enter the woods at the Jay C. Hormel Nature Center during the Kevin and Kyle Dammen Ski Race Saturday morning. Due to the lack of snow, the annual cross--country ski race was converted into a run instead.

Despite the lack of snow cover, the Kevin and Kyle Dammen Ski Race was held as an 8-kilometer run and one-mile fun run. The race is one of the ways the Hormel Nature Center is remembering Kevin, who died in a kayaking accident last year.

“He was a young stalwart in our community,” said Larry Dolphin, Hormel Nature Center director. “Both Kevin and Kyle were leaders. They went out, and when they did something, they did it well.”

Many shared memories of Kevin at the event, as many of Kevin’s family and friends were present to run, to walk, and to watch.

Like skiing, running was another passion of Kevin’s, and he and Kyle ran cross country at Austin High School and at Winona State University.

“Kevin’s been gone almost seven months now, and there’s not a day that goes by that I don’t think of him,” said AHS cross country coach Tony Einertson, who has known the Dammen boys since they started cross country. “He’s not a family member, but he just meant so much to me and my family and to the cross country program.”

The brothers started the race — formerly the Hormel Nature Center Ski Race — when they were teenagers.

After last year’s race, Kyle said he and Kevin decided to pass off organizing duties.

“It’s nice that they could actually keep it going,” said Kyle, who said the run was a good way to honor his brother.

Kevin’s far from forgotten at the Nature Center. Along with the ski race, there’s also a scholarship in his honor that helps students learn about natural resources and there’s a bench overlooking the pond.

Dolphin said they’d talked about organizing a ski race for years, but they’d never had the time to start it up.

“Kevin and Kyle took it on, and it was just great, and I so appreciated their efforts,” Dolphin said. 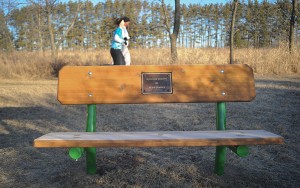 Runners head past a bench dedicated to the memory of Kevin Dammen Saturday morning during the Kevin and Kyle Dammen Ski Race, which was converted to a run due to a lack of snow.

The Dammens went a step further and donated all the money raised at the race back to the Nature Center.

“One of the things he (Kevin) loved to do was make the community a better place,” Einertson said. “That’s starting this race and helping the Nature Center with all the donations they’ve given over the years.”

In its fourth year, Ben Bachmeier and Michelle Johannson took over organizational duties.

Kyle and other family members were still there to support it.

He said it was nice to see the race continue on to support the Nature Center and honor the Dammens.

Einertson said he remembers Kyle and Kevin as having a hardworking attitude in cross country and their willingness to help make themselves and their teammates better.

Though he’s never cross country skied, Einertson bought skis so he could race and support his former runners. 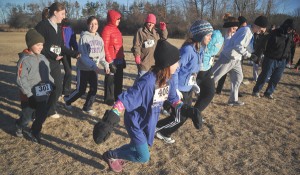 Wren Clinefelter, center, takes off with other runners/walkers for the one-mile race in the Kevin and Kyle Dammen Ski Race Saturday morning. The race was converted to a run because of the lack of snow.

Warm weather found him doing something more natural to him: running.

“You don’t think Jan. 7 you’re going to be able to run at the Nature Center, but I’m a runner by heart, and it’s not a bad thing to be out here running,” Einertson said.

People are usually stuck running on treadmills like hamsters, as Einertson described it, this time of year. But this year many people have been able to continue running outside.

“It’s a strange January,” he noted.

Still, Einertson said this is the offseason for runners as they slowly gear up for track season.

Several cross country runners and AHS graduates turned out for the run.

Einertson said he wants to see the run continue to honor the Dammens and show support for the Nature Center.

“It’s certainly a legacy that I hope continues,” Einertson said. “He was a wonderful young man and he’s missed.”

Dolphin said the typical cross country skiing season lasts six to eight weeks at the Nature Center. This year they’ve had only about one to two days.

“Hopefully, it’s not a running race every year, because I love to ski,” Dolphin said.

— Trey Mewes contributed to this report.