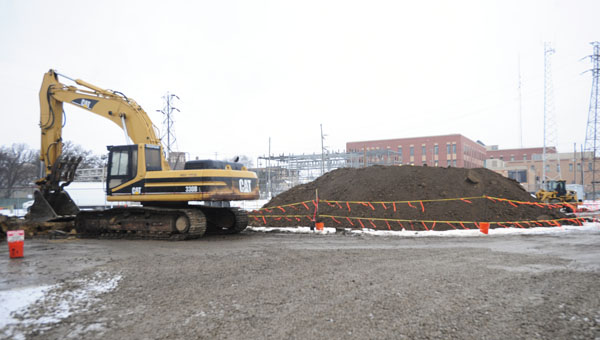 Work at the former Bubbles Car Wash was at a standstill on Friday afternoon. -- Brandi Hagen/Albert Lea Tribune

Alliant Energy’s clean up of the former site of the Albert Lea Light & Power gas plant is in full swing.

Ryan Stensland, spokesman for Alliant Energy, anticipates the work crews will finish excavating in about a month and have the site back to its original form by March. They started the process of removing 15,000 tons of contaminated dirt on Dec. 6, 2011, transporting it one load at a time to a landfill in Austin. Stensland said while the soil is contaminated from the gas plant, it is nonhazardous.

Once complete, Alliant Energy will regrade the site to make it an empty lot.

Stensland said sometimes there’s an odor, so they dig in the winter to minimize that. He said they have air monitors around the site to make sure they’re in compliance.

The site of the old plant, located near the railroad crossing at South Broadway Avenue and East Front Street, has been contaminated with coal tars and light oils, byproducts of the coal gasification process, since the plant ceased operation in 1933.

Though the structure was eventually demolished in 1950, the contaminants remained. The buildings of the former Bubbles Car Wash were demolished this winter as part of the cleanup.

Stensland said there are 54 of these sites across Alliant’s service area, including six in Minnesota. Twenty have been remediated, he said.