Funeral services for Anna Mae Sletten, of Albert Lea, will be held at 10:30 a.m. Saturday at the Bear Lake Lutheran Church. The Rev. Daphne Hamborg will officiate. Visitation will be from 4 to 7 p.m. Friday evening at the Bonnerup Funeral Service and one hour prior to the service at the church. Interment will be in the Bear Lake Cemetery. 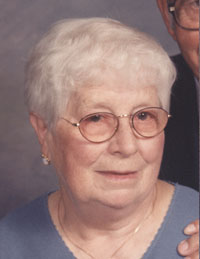 Anna was born April 3, 1927, in Marshalltown, Iowa, the daughter of Leo and Martha (Katzung) Hodges. She graduated from Kiester High School in 1946. On June 4, 1947, she was united in marriage to Henry Sletten in Kiester.

Anna had been employed by Johnson Laundry, Land-O-Lakes Company, and St. John’s Lutheran Home in Albert Lea. She resided in Kiester, Clarks Grove, Twin Lakes for over 30 years, and the past 10 years in Albert Lea.

Anna was a member of the Eagles Auxiliary, VFW Auxiliary, The Red Hat Society and president of the St Johns Lutheran Home Auxiliary for many years. She also enjoyed the Senior Citizens in Twin Lakes, Emmons and Albert Lea. In her free time, she loved to go camping, fishing and playing golf.