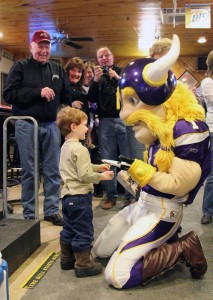 GENEVA — The Geneva Cancer Auction, in its 28th year, has continued to be successful raising money to fight cancer.

The event has grown over the years so much so that it spans four days, both Friday and Saturday night over two weekends. Organizers need all four days to sell all the donated items.

Busho was there Friday evening, and said she usually likes to bid on homemade breads and car wash tokens. She donates pickled beets, and said one jar went for more than $40 on a previous night.

Long-time organizer Dwayne “Whitey” Hagen said they had crowds the first few nights and he was looking forward to the second weekend of the auction.

Hagen said again many items were donated including quilts, baked goods like breads and cookies, tools, Vikings apparel and a myriad of other wares.

“We have just a lot of nice stuff,” Hagen said.

Margaret Bartness, who’s helped with the auction for more than 10 years, said she likes helping out because it’s for a good cause. She was also helping with raffle tickets. There was a quilt raffle and a raffle for a 51-inch plasma TV or cash prizes. The raffle winners were announced late Saturday night.

The Minnesota Vikings cheerleaders and “Benchwarmer” Bob Lurtsema visited the auction Friday evening. The event started Jan. 6 and continued on Jan. 7, and again on Friday and Saturday at the Geneva Bar & Grill.

More than 90 percent of funds raised go to cancer research, because they try to keep expenses low. All money raised goes through the Albert Lea Eagles to the Eagles Cancer Telethon based out of Rochester. The money is then distributed to the Mayo Clinic Foundation for Cancer Research, the University of Minnesota and the Hormel Institute.

Donated items come from people and businesses all over Freeborn County and southern Minnesota. Many people donate and buy items from the auction, essentially giving twice to the cause. Some people even bring things in last minute, like homemade soup or blankets. A wild game feed held in December brought in $17,000, which was donated to the auction.