Dancing at the Outback 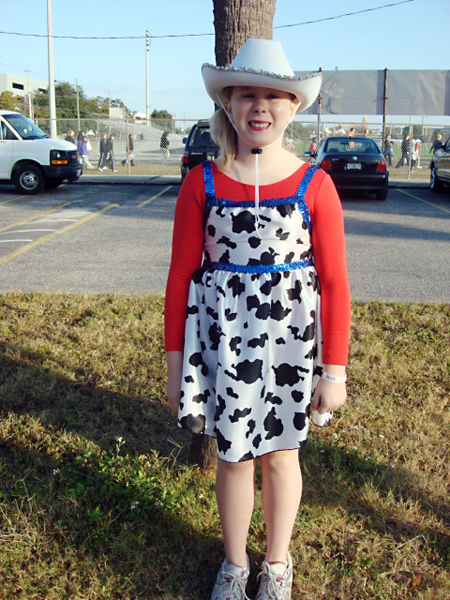 Zoe Oudekerk, 11, of Glenville, poses in her buffalo girl outfit before dancing during halftime of the Outback Bowl. -- Sumbmitted photo

GLENVILLE — When Zoe Oudekerk came from school one day last March, she found a message left by her mom tapped to the front door.

The snow was easier for her to brush off that afternoon, because Zoe had just found out she was selected to dance at halftime of college football’s Outback Bowl, held on Jan. 2, 2012, in Tampa, Fla., as part of the national Just For Kix program.

While an exciting opportunity, the eight-day trip for Zoe and her parents, Patty and Tom, of Glenville, wouldn’t be free. Regardless, Patty made up her mind quickly.

“It was the easiest ‘yes’ in the world,” she said. “I was the proudest mom in the world.”

Months prior, Patty sent a video of Zoe dancing to the Just For Kix selection committee. The fifth-grader at Glenville-

Emmons Elementary School, who participates in Mini Kix in Albert Lea, was one of 305 dancers from 16 states selected.

As soon as Patty received word Zoe was invited to dance, the fundraising began.

“We sold candy bars, did a burger basket night in Glenville, asked for family donations and sent letters out to local businesses,” she said.

Once the money was raised, the family flew on Dec. 27 from Minneapolis to Tampa where they stayed at the Renaissance Hotel, their home base during a week of activities.

While the football game between Michigan State and Georiga was held of the fifth day of the trip, the entire group of dancers, in second grade through high school, along with 200 parent-chaperones, had plenty to do before then.

The girls practiced in hotel’s ballroom the first morning and again that night, but went to Clearwater Beach in the afternoon.

The following day, on Jan. 30, the group bused to Disney World, where they visited the Magic Kingdom, Epcot Center and Hollywood Studios.

After practicing with a marching band made up of high schoolers from around the nation the next day, Zoe went to Busch Gardens that afternoon, an African-themed animal theme park, which captured Zoe’s heart.

“It had a lot of animals and I love animals,” Zoe said. “I adore them. It was just awesome.”

The next day was the Outback Bowl, and Zoe had a dress rehearsal until 10 a.m. before she waited inside the stadium until her performance in the Coca-Cola Halftime Show. Zoe wore a cow print dress with a white cowgirl hat, and kept her eyes on the girl in front of her as she filed out of the stadium’s tunnel and onto the field in front of more than 65,000 fans.

“I wasn’t really nervous,” Zoe said. “I like being in front of people.”

Zoe and the rest of the Just for Kix Outback Bowl Dance Tream, performed to “Skip to My Lou,” “Buffalo Guys” and “Oh! Susanna,” among others, for 9 1/2 minutes before joining their parents in the stands. Before she exited the field, though, Zoe was able to sneak in a hug from Georiga’s mascot, a bulldog named Hairy Dawg.

But she didn’t tell him who she was cheering for.

“I wanted Michigan,” Zoe said “They’re the closest one to us, and Georgia, it’s down there too far.”

Because the weather on gameday was windy and cold, Zoe and her parents left to the bus near the end of the game. The game, which went into triple overtime, was too exciting to ignore, though, so Zoe ran back and forth from the bus to a group of tailgaters with a TV to inform everyone what was going on.

That night, there was a formal dinner and award ceremony for the girls, and the Oudekerks left the next day for Minneapolis.

“It was tiring, but it was the best thing that has ever happened to me,” Zoe said. “I was pretty shy, but I made a lot of new friends.”

This was the 26th year that Just For Kix, headquartered in Brainerd, has performed at halftime of a bowl game. Patty said she decided send in Zoe’s audition DVD because “I think she is a great dancer, and it would be a great experience for her,” she said.

Patty said three to four years down the road, Zoe may audition again to dance with an older group, but hopes Albert Lea considers bringing an entire team down, like Ankeny, Iowa, which brought 40 dancers.

“I am a very proud parent that my daughter was chosen for this opportunity,” Patty said. “It was an experience that she will never forget and will talk about for many years.”