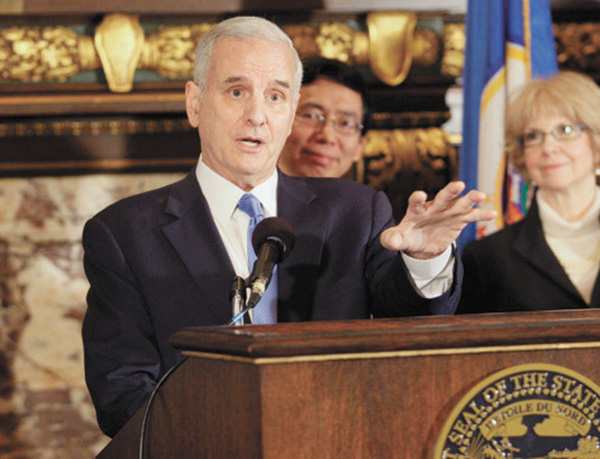 ST. PAUL — Gov. Mark Dayton said Tuesday that Minnesota could create thousands of new jobs by issuing $775 million in bonds for construction projects around the state.

Dayton released his bonding wish list at a news conference where he was flanked by construction workers in hard hats. He proposed $78 million for building projects on University of Minnesota campuses and $63.5 million on MnSCU campuses.

There are no projects for the Albert Lea area in the bonding bill. One that local officials have been pushing for is assistance with the cost of dredging Fountain Lake. The request has been $7.5 million, about half of the entire price tag.

Albert Lea City Manager Chad Adams said he and others are hoping to get the project into the Senate and House versions of the bonding bill.

Also in Dayton’s proposal is $27 million to design a new minor-league baseball stadium for the St. Paul Saints in downtown St. Paul; more than $70 million for civic center projects in Rochester, St. Cloud and Mankato; $30 million for construction and repair of bridges; and a $25 million down payment on design and construction of a new light-rail line linking downtown Minneapolis with the city’s southwestern suburbs.

“My bonding proposal is about putting thousands of Minnesotans back to work,” Dayton said. His administration estimated it would create up to 21,700 new jobs, many of them temporary construction jobs but some permanent ones at newly constructed facilities. He proposed $13.5 million to expand research labs at the Hormel Institute in Austin, whose executive director estimated 120 permanent new jobs.

Dayton’s proposal is subject to legislative approval, and is sure to be a main discussion topic when lawmakers convene the 2012 session next week. The governor urged them to act quickly and approve a bonding package by the end of February, leaving plenty of time for planning that would get most projects underway as soon as the weather permits. Dayton said his proposal emphasized projects that are “shovel- or hammer-ready.”

But leaders of House and Senate Republican majorities took issue with Dayton’s attempt to tie the bonding bill, an even-year tradition at the Legislature, to job creation efforts. Senate Majority Leader Dave Senjem and House Speaker Kurt Zellers said state borrowing should be tied to critical infrastructure needs like repairing deteriorating roads and bridges and not “local pet projects,” as Zellers said in a news release.

“Rather than using debt as a jobs plan, Minnesota would be much better served if the governor turned his attention to creating a positive tax and regulatory climate in which job creators were more confident about expanding and investing in Minnesota,” Senjem said.

Still, Senjem — who also chairs the Senate’s Capital Investment Committee, responsible for the bonding bill — said he and his House counterpart would release their own bonding proposals in the next few weeks.