Delta Company has a new mission

Albert Lea’s Delta Company has been assigned a few different missions on its deployment to Kuwait, and the soldiers have recently found out their new mission. 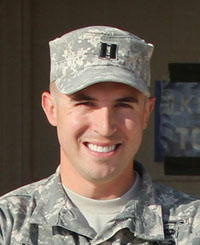 Soldiers were training to be a mobile reaction force before the battalion was tasked with helping with the drawdown of U.S. forces from Iraq in November and December. Now that the Iraq War is over they have their new mission.

The 1st Brigade Combat Team, of which Albert Lea’s unit is a part of, will remain in Kuwait providing base management at Camp Buehring and regional security. Soldiers will still be returning around May, as was originally planned. Delta Company’s Capt. Eric Athman, communicating with the Albert Lea Tribune from Kuwait, said soldiers will continue to train in squad battle drills and individual soldiers skills.

“In the next month we are training and testing for the Expert Infantry Badge,” Athman said.

The badge can only be earned by infantry and Special Forces soldiers and proves that a soldier is an expert at their job. Athman said the badge requires a combination of excellent scores on the Army’s physical fitness test, land navigation, weapons qualification and a test that includes 40 infantry tasks across four days. The last day of the test is finished with a 12-mile road march carrying a 35-pound rucksack to be completed in three hours or less.

“It’s a testament to the soldier’s knowledge and skill,” Athman said.

Delta Company is part of the 2nd Battalion, 135th Infantry Regiment within the 34th “Red Bull” Division of the Minnesota National Guard. Athman said there have been questions about Delta Company coming home early with the Iraq War ending, but that will not be the case. Before the soldiers were helping with the drawdown of troops and equipment from Iraq they were completing training to be a Mobile Reaction Force, or MRF, which will be their new mission. As an MRF soldiers will be doing a variety of tasks.

“We are planning joint training exercises with the Kuwaiti National Guard,” Athman said.

In addition to training for the Expert Infantry Badge, soldiers will have the opportunity to work on a variety of personal goals. Athman said workshops are planned to help soldiers who are unemployed when not deployed with interviewing skills, resume writing and networking. Soldiers who are planning to attend college will have the option of attending workshops regarding college applications, entrance exams and student-loan application work.