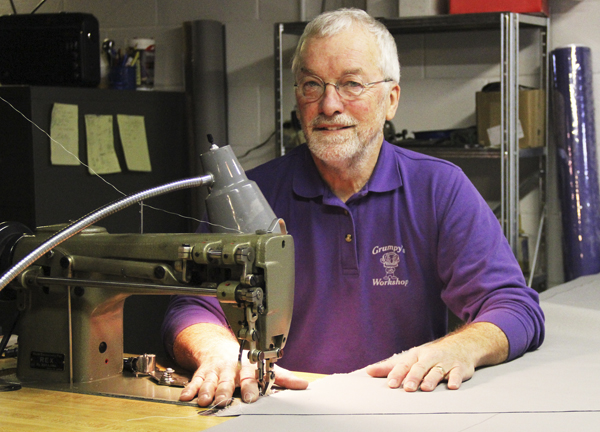 Steve Hanson sits at his sewing machine on Wednesday in his basement, where he makes boat covers. He will be wearing the costume of a grave digger at the Gourmet Auction on Friday. -- Tim Engstrom/Albert Lea Tribune

Some may wonder what a grave digger from the fur trading era has to do with a gourmet food tasting event and auction. Yet there is a good reason for the correlation.

Steve Hanson of Albert Lea, better known as the grave digger at the annual Big Island Rendezvous, will be one of 13 participants showcasing foods at Albert Lea’s 12th annual Gourmet Auction, beginning 6 p.m. Friday at Wedgewood Cove Golf Club. Proceeds from the auction are divided between the Albert Lea-Freeborn County Chamber of Commerce and the Big Island Rendezvous. 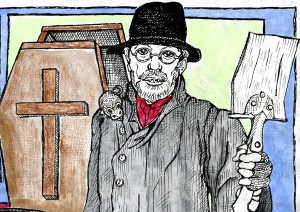 Steve Hanson appears as a grave digger in this print about the Big Island Rendezvous. -- Print by Eloise Adams

However, Hanson’s approach may be a little different from the other cooks. He will be wearing his grave digger costume from the Big Island Rendezvous, along with his pirate companion, at his booth at the Gourmet Auction.

“I’ve been the grave digger now for several years,” Hanson said about the Big Island Redezvous. “It’s just kind of a character that developed, and now it’s my identity, almost.”

While many people know Hanson as the grave digger, some are starting to recognize his culinary skills.

Hanson will showcase his homemade chicken noodle soup at the auction, along with tomato salad, chuck wagon beans, hell-fired steaks and pineapple upside down cake for dessert.

“I call it confused cake,” Hanson joked. “You’ve got to have a dessert, right?”

This won’t be the first time Hanson has done something to support the Big Island Rendezvous. However, it will be his first time participating in the Gourmet Auction.

Despite the field of participants, Hanson isn’t nervous.

“This is just a fundraiser,” he said. “Everybody is here to have fun.”

As a history buff and one who loves to dress up as the grave digger and educate people about the fur trading era, Hanson will benefit from the auction.

“It’s all because of the Rendezvous,” he said.

Among food tasting, the Gourmet Auction will feature more than 100 items between a silent and live auction, with some big-ticket items such as a tandem skydive package and pulled pork dinner for 25 people, Kehr said. He added the auction will likely raise about $10,000. Tickets are $20 per person, $30 per pair or $150 for a table of 10 and can be purchased from the chamber by calling 507-373-3983.