Donald Schulz, 79, of Wells, died Tuesday, Jan. 10, 2012, at Mayo Clinic Health System in Albert Lea, from complications of a stroke and pneumonia. Funeral services will be held at 1 p.m. Saturday at St. Paul’s United Church of Christ in rural Minnesota Lake. Visitation will be from 4 to 7 p.m. Friday at Bruss-Heitner Funeral Home in Wells, and will continue one hour prior to the service at the church on Saturday. The Rev. Dennis Secrease will officiate and burial will take place in the church cemetery, with military honors accorded by the Wells Color Guard. Bruss-Heitner Funeral Home in Wells is assisting the family with arrangements. 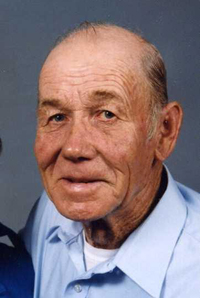 Donald Dean Schulz was born June 21, 1932, on the family farm in Dunbar Township, Faribault County, the son of Emil and Anna (Thisius) Schulz. He attended country school until the eighth grade. Donald was a life-long member of St. Paul’s UCC Church and belonged to Brotherhood and he sang in the choir when he was young. He was as a member of the cemetery board for many years. Donald was in the Army and stationed in Germany from 1956 to 1958. On Jan. 13, 1959, he was united in marriage to Myrna Hendrickson at First Lutheran Church, now Good Shepherd Lutheran Church in Wells. He farmed all his life and told many stories of being born in the house on the family farm where he lived until November 2011 when the couple moved into Wells. He loved to visit friends and family and he enjoyed gambling and going to auctions. Donald and Myrna went to Branson and Las Vegas many times as they enjoyed traveling. In 2000, he revisited Germany and other parts of Europe with a friend. He was in the Centennial Play in Wells in the late 60s. He and Myrna worked at Farm America in Waseca for many years. Donald liked to play cards, fish, ice fish, hunt, watch “M.A.S.H.” and other comedies. He always spoke the truth and was an honest, hardworking, humble man who liked the simple life.

Donald is survived by his wife of 53 years, Myrna of Wells; daughter, Kathy (special friends Gene and Faith Kauffmann) of Wells; brother, Ralph and Sharon Schulz of Golden Valley; sisters-in-law: Jeanette Schulz of Wells and Delores Bennett of Albert Lea; brother-in-law, Hilbert Voigt of Albert Lea; step-sister, Corrine and Dale Wise of Arizona; Jeanette Fenske and Mary Fenske, both of Blue Earth; and many nieces, nephews, cousins and friends.

He is preceded in death by his son, Kent, in 1994; two sons in infancy; his parents; his brother, Howard; Myrna’s parents; brothers-in-law: Roger and David Hendrickson and Ellsworth Bennett; sister-in-law, Bernadine Voigt; niece, Julie Voigt; and nephew, Randy Voigt; and step brothers: Wayne and Floyd Fenske