The funeral service for Esther B. Doppelhammer, of Albert Lea, will be held at 10:30 a.m. Friday at Ascension Lutheran Church in Albert Lea. The Rev. Mark Boorsma will officiate. Interment will be in Conger Cemetery. Visitation will be from 4 to 7 p.m. on Thursday at Bonnerup Funeral Service, Albert Lea, and one hour before the service at the church. 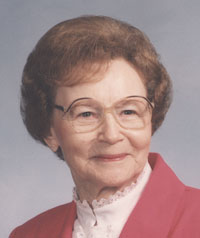 She was born on Aug. 11, 1915, in Mansfield Township the daughter of John and Bertha (Stiebler) Wacholz. Esther was baptized and confirmed at Mansfield Lutheran Church. She was united in marriage to Arthur Doppelhammer on Feb. 27, 1935, also at Mansfield Lutheran Church. Following their marriage they lived in Conger where she and Arthur were charter members of St. Paul Lutheran Church. They moved to Albert Lea in 1986, where they joined Ascension Lutheran. Esther had worked for the Mansfield Store and Mattick’s Store in Conger, and then, after son Lowell bought Mattick’s Store, she worked for him.

She loved doing embroidery, gardening and canning, and raising her beautiful flowers. Her life centered around her faith as she so enjoyed being actively involved in church activities and her family, whom she loved and cared for so tenderly.

She was preceded in death by her parents John and Bertha Wacholz; her husband Arthur in 1991; daughter-in-law, Ione Doppelhammer; brothers: Ervin, Harry, Alfred, Henry, Frank, Manville and Maynard Wacholz; sisters:Sarah Doppelhammer and Frieda in infancy.